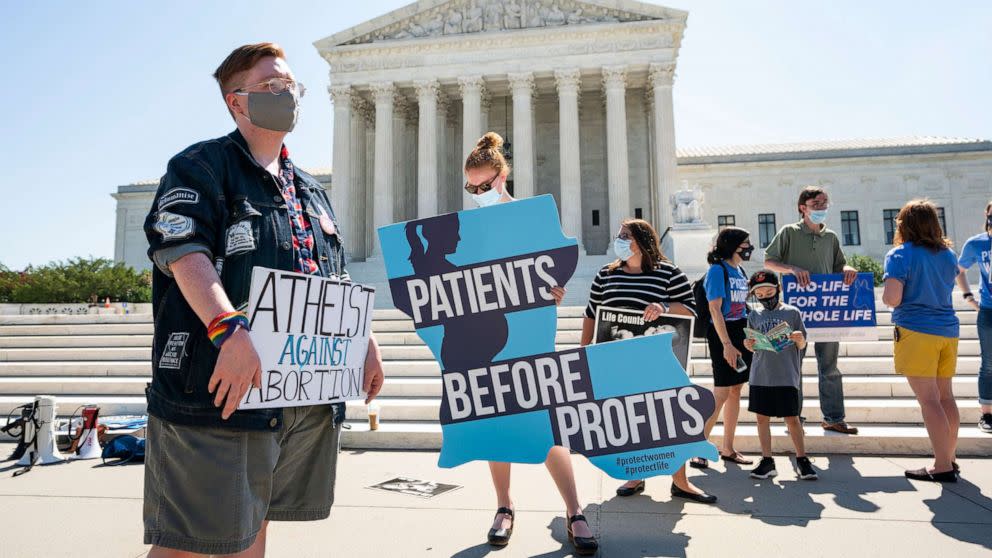 The Supreme Court’s decision to strike down a Louisiana law is being hailed as a major win for abortion rights advocates, even as they are still wary about the road ahead.

The Supreme Court’s 5-4 ruling in the case, June Medical Services v. Russo, means that doctors in the state who provide abortion care at clinics and medical offices will not also have to have admitting privileges with a nearby hospital that would allow patients to go to that hospital if they need urgent care.

If the law had been upheld by the Supreme Court, Louisiana, a state of more than 4.6 million people whose population is 51% female, would likely have gone from having three abortion clinics in the state down to one, Kathaleen Pittman, administrator of the Hope Medical Group for Women in Shreveport, Louisiana, the lead plaintiff in the case, told “Good Morning America” earlier this month.

Pittman, who has said the choice was either to challenge the law or shut down, described the mood at Hope Medical Group for Women as “absolute giddiness” when the Supreme Court ruling came down.

“It’s palpable, the excitement in the air,” she said Monday in a call with reporters. “Everybody is trying to calm down so they can take care of patients.”

In the U.S., three states — Missouri, North Dakota and Utah — currently require admitting privileges for abortion providers, while efforts to enforce similar requirements have been blocked in eight states, according to the Guttmacher Institute, a research group that supports abortion rights.

While abortion rights advocates celebrated the decision, they also warned this was not the end of challenges to abortion as lawmakers continue to propose bills that restrict access.

“We’re relieved that the Louisiana law has been blocked today but we’re concerned about tomorrow,” Nancy Northup, president and CEO of the Center for Reproductive Rights, said in a statement Monday. “With this win, the clinics in Louisiana can stay open to serve the one million women of reproductive age in the state. But the Court’s decision could embolden states to pass even more restrictive laws when clarity is needed if abortion rights are to be protected.”

In 2019 alone, more than 350 pieces of legislation restricting abortions were introduced across the country, according to the Guttmacher Institute.

The Center for Reproductive Rights is currently litigating 30 abortion rights cases across the U.S., according to Julie Rikelman, the group’s senior litigation director, who served as lead attorney for June Medical Services v. Russo.

In the 2020 opinion, Breyer called the Louisiana law “almost word-for-word identical to Texas’ admitting-privileges law,” which was ruled unconstitutional by the Supreme Court in the 2016 case Whole Woman’s Health v. Hellerstedt.

“Abortion care is healthcare. Full stop,” Hagstrom Miller said in a statement Monday. “To those seeking abortion care services, we are here for you. You deserve to decide if, how, and when you are ready to start a family without barriers, fear, or interference. Today, we thank the Hope Clinic for restoring OUR hope.”

Chief Justice Roberts had been on the dissenting side of the Texas Whole Woman’s case. In his concurring opinion with the majority on June Medical, Roberts explained that he still believed his 2016 opinion that “the case was wrongly decided,” but he joined the majority this time around because “the question today” is on “whether to adhere to [the Whole Woman’s case] in deciding the present case.”

Roberts’ opinion with the majority in the June Medical case was a welcome relief for Kim O’Brien, 43, a Louisiana native and mother of two who had to travel out of state to have an abortion in 2011. She joined the case as an amicus curiae, or “friend of the court,” because she does not want any women, including her daughters, to be denied medical care, specifically access to abortions, because of where they live or the resources they have.

“I feel reassured that there’s integrity on the court that respects the real legal concept and not politics,” O’Brien, who is also a lawyer, told “Good Morning America.” “I know that in my situation I had to fight through all these obstacles to get my abortion so I know the practical effects of these TRAP laws and despite my legal right to an abortion, my access was really restricted by these types of laws.”

“I feel hopeful for the future of women’s reproductive health but I also know that this is not over, that certainly legislators are going to try to enact laws to prevent women from getting abortions at all,” she said.

Alexis McGill Johnson, president, Planned Parenthood Action Fund, similarly described the Supreme Court’s ruling as a “sigh of relief” but added the fight for abortion rights is “far from over.”

“The Supreme Court sent a clear message to politicians across the country: Stop trying to take away access to safe, legal abortion. But our fight is far from over,” Johnson said in a statement. “While today is a victory for Louisianans, we must remember that we are in a world where politicians have pushed basic health care almost out of reach for millions of Americans, and where your ability to access abortion is still determined by where you live, how much money you make, and in this country that effectively also means the color of your skin.”

Advocates for abortion rights are calling on Congress to pass The Women’s Health Protection Act, a bill that would protect a woman’s right to an abortion and health care providers’ ability to provide abortions. The bill was introduced in the U.S. Senate last year by Sen. Richard Blumenthal, D-Conn., and is now before the Senate Judiciary Committee.

Anti-abortion groups, meanwhile, were quick to express their disappointment with the Supreme Court’s ruling in the Louisiana case.

“Today’s ruling is a bitter disappointment,” Susan B. Anthony List President Marjorie Dannenfelser said in a statement. “It demonstrates once again the failure of the Supreme Court to allow the American people to protect the well-being of women from the tentacles of a brutal and profit-seeking abortion industry.”

Dannenfelser called on Americans to re-elect President Donald Trump to advance an anti-abortion agenda throughout government.

“Today’s ruling reinforces just how important Supreme Court judges are to advancing the pro-life cause. It is imperative that we re-elect President Trump and our pro-life majority in the U.S. Senate so we can further restore the judiciary, most especially the Supreme Court,” she said.

Jeanne Mancini, president of March for Life, an anti-abortion group, also cited the 2020 election in her reaction to the Supreme Court’s ruling.

“No abortion facility should receive a free pass to provide substandard care,” she said in a statement. “This decision underscores the importance of nominating and confirming judges who refrain from legislating from the bench, something pro-life voters will certainly remember come November.”

Abortion rights advocates say Supreme Court ruling is a victory but ‘our fight is far from over’ originally appeared on goodmorningamerica.com