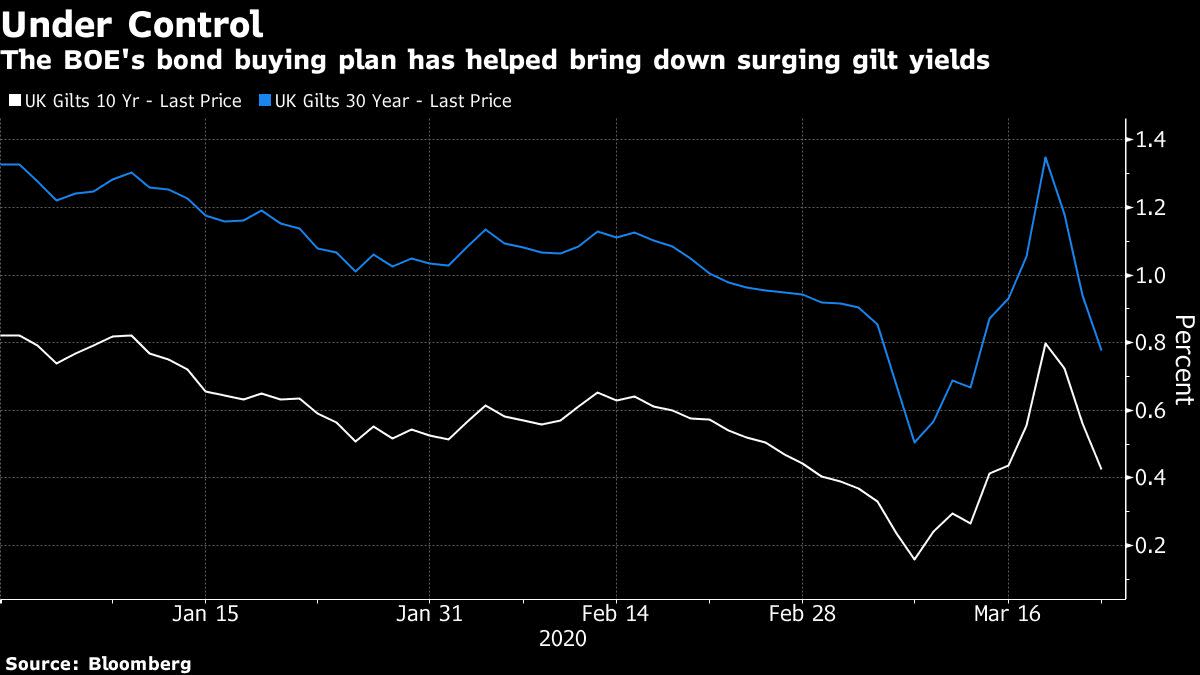 (Bloomberg) — The Bank of England’s new 200 billion pounds ($231 billion) of bond purchases has the potential to hit the market at a faster pace than currently advertised.

With rates near zero already, increasing the speed of purchases is one lever policy makers could pull if they want to boost the impact of the current package of measures, without following the Federal Reserve in moving to unlimited buying.

The central bank’s new plan — part of its package of measures to combat the economic impact of coronavirus — kicks off on Tuesday with 3 billion pounds of gilt purchases, split evenly between three maturity buckets. That level is due to be repeated on Wednesday and Thursday.

But the terms allow for some flexibility — with the central bank due to confirm the size of the following week’s operations every Friday — meaning that the current pattern may not always be the model.

While that process is similar to previous rules, last week’s BOE statement left the door open for a faster pace of buying if needed, stating that it “intends to set and vary the pace of its gilt purchases in response to market conditions and to support market functioning.”

“Given prevailing conditions, the bank intends — at least initially — to make purchases at a materially higher pace than in the recent past,” the BOE added.

The central bank is due to announce its next decision on March 26 after already making two emergency moves this month. A spokesperson for the BOE declined to comment on the prospect for quicker buying.

The central bank has already shown itself ready to make good on the pledge to accelerate bond purchases, acquiring more that 10 billion pounds of gilts across Friday and Monday as it looked to reinvest proceeds for expired gilts bought under it’s previous QE plans.

The new daily total of 3 billion pounds is also a significant upgrade from when the BOE’s Asset Purchase Facility was last expanded in the aftermath of the Brexit vote. The purchases totaled 3.51 billion pounds a week, spread over three days, with only one maturity bucket eligible each day.

The BOE’s package helped support U.K. bonds that had been in the grips of a global bond sell off prompted by concerns over the huge level of government spending needed to help the economy through the pandemic.

In a conference call with reporters following the decision, Governor Andrew Bailey said that part of the reason for acting again was that market moves had bordered on the disorderly in recent days.

In a sign of the impact of the plan, gilts rose on Monday, even after the government pledged late last week that it would spend whatever is needed to support the economy — a plan financed through extra borrowing. The rally since last Thursday means the U.K. can borrow for up to 30 years at a rate of considerably less than 1%.

The BOE said last week that the 200-billion-pound total will mainly be made up of gilt purchases, with the rest being made up of corporate bonds.

When Tracking the Virus Means Tracking Your Citizens

Frustrated Gamblers Turn to Politics as the Only Game in Town

Those Who Purchased Centric Health (TSE:CHH) Shares Three Years Ago Have A 82% Loss To Show For It

There’s never been a better time for airlines to remove the hated middle seat on planes, says one Wall Street analyst

How Comedians Are Adapting to Entertain Fans While Self-Isolating