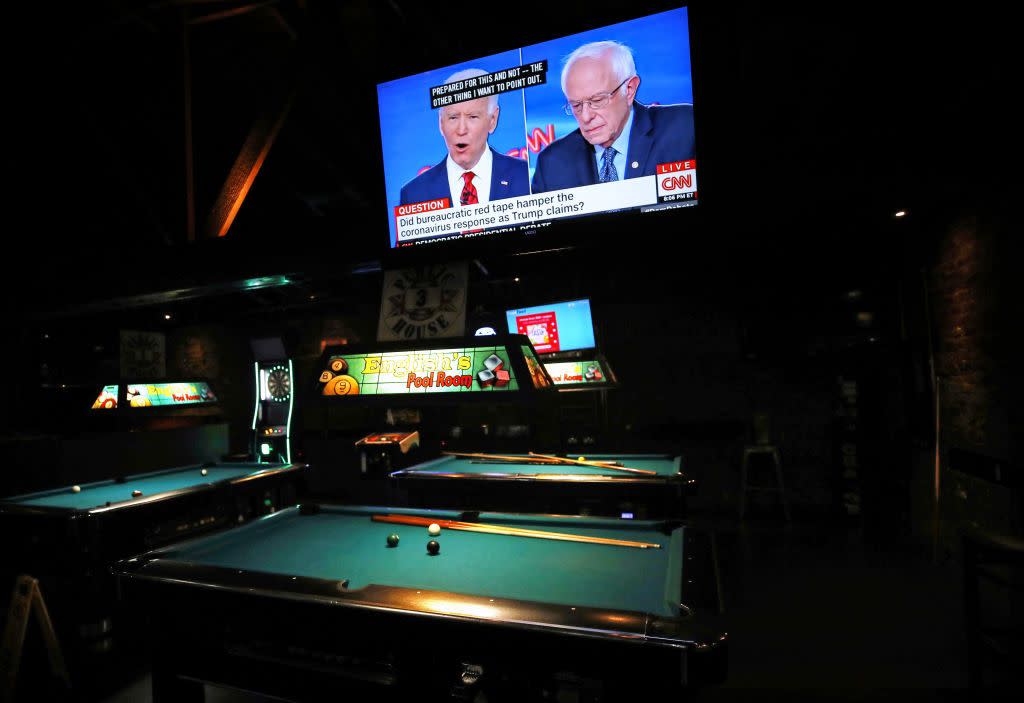 (Bloomberg Opinion) — In what’s likely be his final nomination debate, former Vice President Joe Biden started strong and ended strong when he talked about the coronavirus pandemic. And he did well enough in the rest of the two-hour event Sunday night with Vermont Senator Bernie Sanders.

Biden had given a solid speech on Thursday laying out a plan for how the government should be responding to the spread of Covid-19, the illness caused by the coronavirus — for example, he’s urging use of the military to rapidly increase medical capacity — and he seemed ready to implement that plan when he talked about it in the opening segments of the debate. It wasn’t just the specifics. His process-based answers, which often compared what the Barack Obama administration had done during emergencies with what President Donald Trump has been doing, may not have been particularly exciting to listen to, but the truth is that it’s more important for a president to understand how to get things done quickly when necessary than to have ready a specific plan for a current crisis, given that future situations aren’t easy to predict.(1) The contrast between Biden and Sanders, who reads every situation as an endorsement for his broad policy preferences, played well for Biden. More importantly, the contrast between both candidates and their thoughtful, coherent and reality-based discussion of the pandemic with the incoherent misinformation from Trump couldn’t have been stronger.

Not to mention that Biden (and Sanders) were able to show compassion and understanding for people going through tough times, which Trump has shown himself to be incapable of doing.

The rest of the debate was a lot less impressive for Biden, although I agree with those who suspect that all anyone will take away from it is his pledge to name a woman as his running mate. Biden and Sanders spent most of the 85 or so minutes between opening and closing coronavirus segments arguing about long-forgotten positions they took and votes they cast on Social Security, gun control, the Soviet Union and more. Biden inexplicably allowed Sanders to drag him through all this ancient history, much of it sure to be incomprehensible to many voters who had tuned in, instead of simply ignoring the Vermont senator and using his time to lay out his case against Trump.(2)

But most of it won’t matter much. Biden is, by all accounts, likely to win big in Arizona, Florida, Illinois and Ohio, the four states voting this Tuesday, and realistically the competitive portion of this nomination fight ended on Super Tuesday back on March 3, with those results confirmed on March 10.(3) Debates can matter in the short run during the primaries and caucuses, but they’re much less important in the general election — let alone a primary debate months before November. Biden’s reasonably good performance Sunday night won’t prevent Trump’s campaign from claiming that he’s in cognitive decline, a disgusting smear that was just as untrue before the latest debate as it is afterward. Nor will candidate debates determine the effect of the pandemic on the election. Events, both in hospitals and in the economy, will matter far more than political spin.

Nomination debates are important because they’re part of how political parties use the nomination process to define themselves. That’s happened in this contest, as is clear both from Biden’s victory and from the way he is adopting some of the popular policy ideas advocated by the losers, notably Sanders and Senator Elizabeth Warren of Massachusetts. (Michael Bloomberg, the founder and majority owner of Bloomberg LP, also sought the Democratic presidential nomination and has endorsed Biden.)

Nomination debates are also important early in the process because they’re a convenient way for party actors to see the candidates, including the lesser-known ones, in action, and because media coverage of the debates once the primaries and caucuses begin can give candidates a boost. Now that the nomination has been settled but for the shouting — oy, so much shouting from these two candidates — there’s really not much point. Sanders had earned tonight’s event, a one-on-one with Biden, but unless there’s some massive surprise on Tuesday, there’s really no reason for any more debates.

(1) This shouldn’t read as a knock on former candidate Elizabeth Warren and her many plans – Warren also has demonstrated the ability to make things happen in both Congress and within the executive branch.

(2) I’m curious about whether Biden’s debate-prep team had planned for him to go toe-to-toe with Sanders over a bunch of stale issues, or if it was a candidate failure to follow his advisers’ advice. Given that Biden was clearly ready for some of it, I suspect the former, but it wasn’t entirely clear.

(3) Could the coronavirus reduce turnout enough to make polling less accurate on March 17? Yes, but there’s plenty of early voting that’s already happened, and the state where Biden’s polling lead is the smallest – Arizona, where he leads by 25% – is largely a vote-by-mail state that presumably would be less affected. The truth is that Biden’s polling leads are so large that even a huge polling error would still produce an expanded delegate lead for Biden. And of course this cuts both ways; a polling error could be in either direction, meaning that Biden could win by more than expected.

To contact the author of this story: Jonathan Bernstein at [email protected]

To contact the editor responsible for this story: Jonathan Landman at [email protected]

Jonathan Bernstein is a Bloomberg Opinion columnist covering politics and policy. He taught political science at the University of Texas at San Antonio and DePauw University and wrote A Plain Blog About Politics.