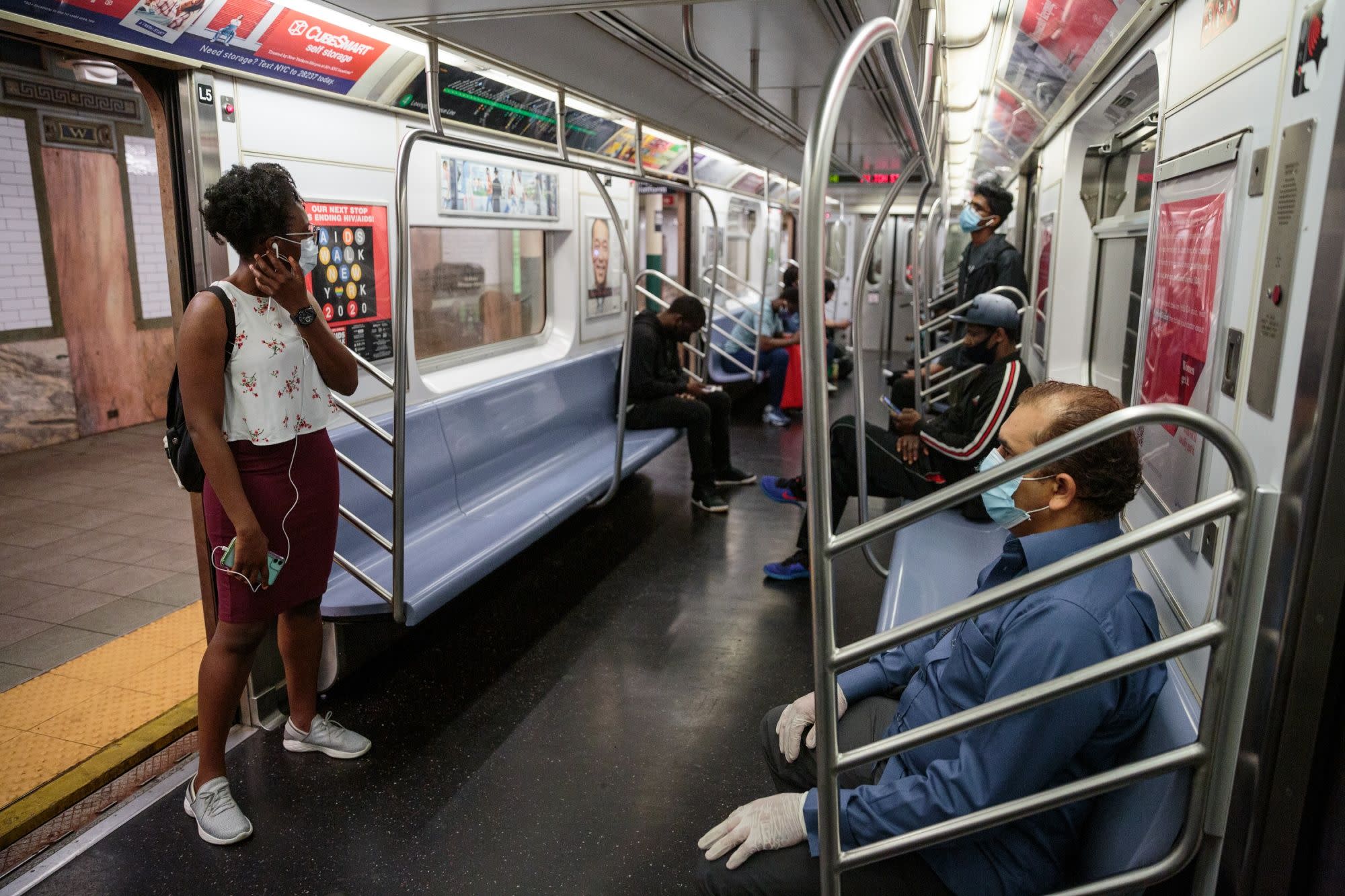 (Bloomberg) — Brazil surpassed Italy as the country with the third most fatalities in the world from the coronavirus. Even as the pandemic is easing in some countries, the virus continues to spread, adding about 100,000 cases a day as new hot spots emerge from Latin America to India.

American Airlines and United Airlines are adding flights in July, signaling travelers are returning more quickly than expected. New York City reported no confirmed fatalities for the first time since March, though three deaths from untested patients may be attributable to the virus.

Fears of deflation justified a decision by the European Central Bank to ramp up its emergency bond-buying program, according to a policy maker. A study that said a malaria drug backed by U.S. President Donald Trump raised the risk of heart side effects and death has been retracted by the authors.

Subscribe to a daily update on the virus from Bloomberg’s Prognosis team here. Click VRUS on the terminal for news and data on the coronavirus. For a look back at this week’s top stories from QuickTake, click here.

Fears of deflation justified the European Central Bank’s decision to ramp up its emergency bond-buying program, according to policy maker Pablo Hernandez de Cos.

“Deflationary risks have increased and that’s one of the reasons the European Central Bank is taking the action it is taking — to ensure that risk doesn’t materialize,” the Governing Council member and Bank of Spain governor said in an interview with Bloomberg News in Madrid.

The comments highlight the fear that the coronavirus pandemic could tip the euro area into a Depression-like spiral of falling prices and wages if the hit to the economy isn’t countered.

That view was echoed by Executive Board member Fabio Panetta, who told Italy’s Radio 1 that coronavirus lockdowns have led to a “resurgence of deflationary pressures.”

The European Commission is urging member states to fully reopen all internal borders by the end of this month. European states should abolish border controls within the bloc in the coming weeks as the coronavirus situation has improved everywhere, EU Commissioner Ylva Johansson told Sueddeutsche Zeitung newspaper in an interview on Friday. Johansson said she will propose such a return to normal in a video conference with EU interior ministers on Friday morning.

Separately, Prime Minister Andrej Babis said in a televised briefing that the Czech Republic will remove all travel restrictions with Germany, Austria and Hungary. Czechs will allow free travel with more countries as of June 15

Germany’s coronavirus infection rate dropped further below the key threshold of 1.0, while the number of daily cases remained far below the thousands seen at the height of the crisis more than two months ago.

There were 351 new cases in the 24 hours through Friday morning, bringing the total to 184,472, according to data from Johns Hopkins University. That compares with 242 infections the previous day. Fatalities increased by 33 to 8,635.

The reproduction factor of the virus fell to 0.57 on Thursday from 0.71 the day before, according to the latest estimate from the Robert Koch Institute. That means 10 infected people are estimated to infect an average of less than six others.

Japan’s success against the coronavirus without enforcing a strict lockdown is due to the citizens’ “cultural standard” that is different from other nations, Finance Minister Taro Aso said, drawing criticism from the public that the comments were inappropriate.

“Other countries have called me up and asked me if we’re the only ones with some drug against the virus or something,” Aso said in response to a question from a lawmaker on Japan’s reputation of successfully containing the pandemic. “When I tell them ‘our country’s cultural standard levels are different to yours,’ they’re left speechless. That’s the simplest way to put an end to the questions.”

Japan doesn’t plan to quarantine business travelers when it begins to loosen its border controls, instead relying on virus testing and placing limits on people’s movements, according to the Nikkei newspaper. The changes could be introduced as early as this summer, the Nikkei reported Friday, without saying where it got the information. The policies will apply to a broad range of work-related travel, from technical trainees to executives.

The report comes as the government, which has barred entry to foreigners from 111 countries and regions, discusses loosening restrictions on travel with New Zealand and Vietnam.

New York City’s health department produced data Thursday that showed no deaths of virus-carriers the previous day, giving officials cause to cautiously celebrate. Three deaths probably attributable to Covid-19 occurred in untested patients, the department reported. It was a far cry from a week in mid-April when the city recorded about 700 deaths a day.

“In the face of extraordinary challenges, New Yorkers have gone above and beyond to keep each other safe throughout the crisis,” said mayoral spokeswoman Avery Cohen. “With hope on the horizon, we will continue to do everything we can to reopen safely without losing sight of the progress we’ve made.”

CSL Ltd., Australia’s largest drugmaker, and partners agreed to develop an experimental Covid-19 vaccine from the University of Queensland that could be available in 2021 if clinical trials are successful.

The university, Melbourne-based CSL and the Coalition for Epidemic Preparedness Innovations will work together to accelerate the development, manufacture and distribution of the experimental immunization. The vaccine is slated to enter early-stage patient studies next month.

Brazil reported a record number of daily coronavirus deaths, surpassing Italy to become third in the world in number of fatalities from the disease.

The nation of 210 million people has become an epicenter of the virus. The region now accounts for about 40% of the world’s daily virus deaths. While the pandemic has eased in some countries, the virus continues to spread, adding about 100,000 cases a day as hot spots emerge across Latin America and India.

Domestic capacity will be about 30% of last year’s level, United said Thursday. While that’s a significant increase over June, it lags American’s July goal of flying 55% of last year’s U.S. schedule. The busiest days next month will have about 4,000 flights, up from 2,300 in June, said Vasu Raja, American’s senior vice president of network strategy.

Airlines are trying to gauge the demand recovery after the worst crisis in industry history, with the pandemic bringing travel to a virtual standstill.

U.S. airlines objected to China’s plan to ease its ban on foreign carriers starting June 8 — a change of course that came a day after the Trump administration issued its own limit on Chinese flights.

The trade group Airlines for America said more is needed than one passenger flight to China a week, as announced by the China’s Civil Aviation Administration. The CAAC didn’t name any countries or carriers, but the move opens up a chance for U.S. airlines to return for the first time in four months.

France will add incentives for apprenticeships and help businesses that keep staff on payroll during an economic downturn to prevent losing a generation to long-term unemployment triggered by the coronavirus.

The move will cost around 1 billion euros ($1.1 billion), an official in President Emmanuel Macron’s office said. The government will also expand the financing of a system that lets struggling companies furlough workers if they reach an agreement with unions to adjust working hours and conditions over the long-term.

Young people are a particular concern, with the government estimating 15% of those in professional training dropped out during the shutdown to contain the virus.

Ford Motor Co. delayed plans to have salaried employees return to offices as union leaders question whether the automaker is doing enough to protect hourly workers who are back on the factory floor.

Staff who have been working from home won’t return to offices until at least the beginning of September, said T.R. Reid, a Ford spokesman. The company said it’s putting off earlier plans to call employees back starting this month due to shortages of personal protective equipment and the need to establish new safety protocols at buildings including its headquarters in Dearborn, Michigan.

American Airlines Group Inc. will reduce its officer ranks by 30%, Chief Executive Officer Doug Parker said in a memo to employees, as the carrier slims down after the coronavirus choked travel demand. The shake-up is the first step by American to cut 30% of management and support staff.

Coronavirus cases in the U.S. increased 1.1% as compared with the same time Wednesday, to 1.86 million, according to data collected by Johns Hopkins University and Bloomberg News. That was in line with the average increase over the past seven days. Deaths rose 0.9% to 107,685. New York cases rose 0.3%, while Florida reported 60,183 infections, up 2.4% from a day earlier.

A study that said a malaria drug backed by U.S. President Donald Trump raised the risk of heart side effects and death has been retracted by the authors.

The study published two weeks ago in the prestigious Lancet U.K. medical journal had raised questions about the accuracy of the underlying data, said researchers said in retraction note published Thursday.

While Surgisphere Corp., the company behind the data on hydroxychloroquine and chloroquine, had signaled it would cooperate with an independent review, it reneged, citing confidentiality agreements, the study’s authors wrote. “As such, our reviewers were not able to conduct an independent and private peer review,” the authors said.

Professional basketball is on track to restart its season July 31 at Walt Disney World in Orlando, Florida, more than four months after halting play. In a 29-1 vote, the National Basketball Association’s owners approved a plan to have 22 of the league’s 30 teams start play at at the theme-park complex, according to the New York Times.

The NBA, which suspended games on March 11, is seen as a bellwether for much of the sports world. The National Basketball Players Association will meet Friday to ratify the plan.

Casinos in Nevada reopened Thursday following a nearly three-month shutdown due to the coronavirus, and some properties let guests in right after midnight.

The Nevada Gaming Control Board said resorts should operate at no more than 50% of capacity on their floors.

The U.S. Department of Health and Human Services introduced new guidance to provide a better picture of Covid-19 testing efforts, particularly in terms of race, gender and ZIP code.

The quality of government data has been faulted for months, particularly as evidence emerges that minority communities have been affected the most by the virus. The new guidance standardizes reporting of test data to the Centers for Disease Control and Prevention, including on fields such as gender and type of test performed. Laboratories must comply by Aug. 1.

Masks and face coverings remain an important tool to stop spread of the coronavirus, the director of the Centers for Disease Control and Prevention told Congress, adding that he’s worried that some Americans appear to be ignoring the advice.

“We continue to see this as a critical public health tool,” CDC Director Robert Redfield said in Washington Thursday. Responding to questions about large public gathers of unmasked people, he said that, “obviously we’re very concerned that our public health message isn’t resonating.”

New York Governor Andrew Cuomo, noting people demonstrating over the death of George Floyd may have become infected, said the state’s testing criteria has been expanded to cover the protesters.

“If you went to a protest, get a test,” Cuomo said. “Act as if you may have been exposed.”