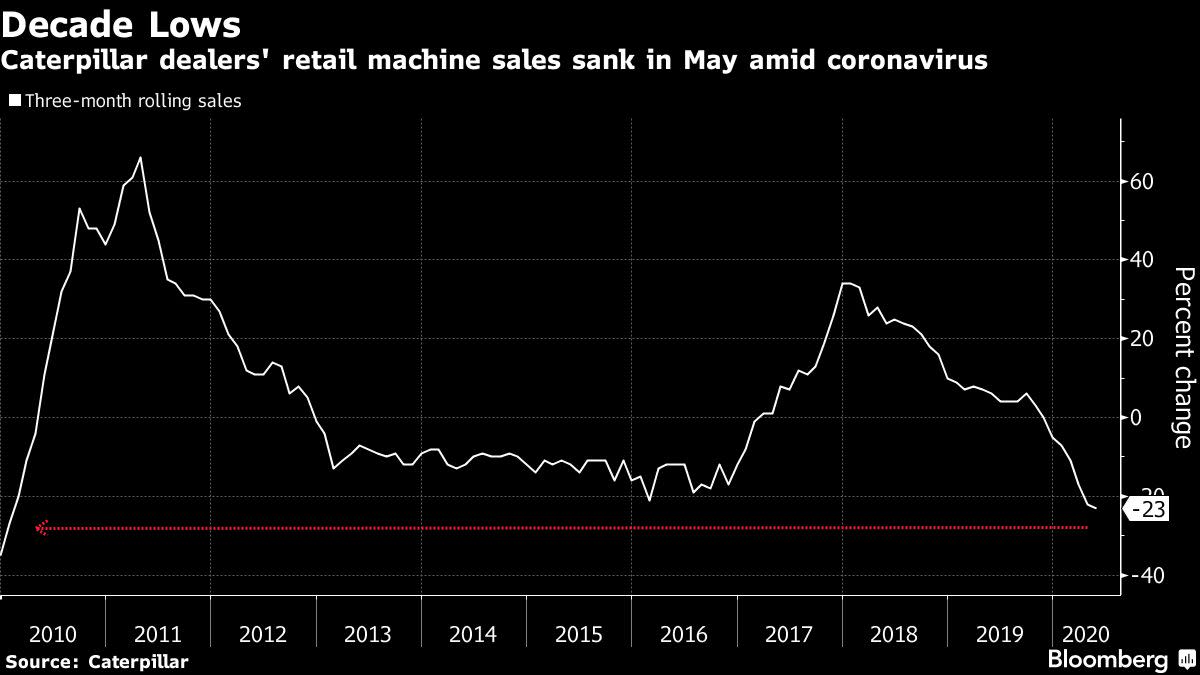 (Bloomberg) — Caterpillar Inc. offered little hope of a quick recovery in demand for its machinery, as concern of second waves of the coronavirus weighed on the prospects for the rest of the year.

The Deerfield, Illinois-based company’s Chief Financial Officer Andrew Bonfield told analysts in a conference call that they shouldn’t expect margins to improve much in the third quarter compared to the second quarter. Earlier, Caterpillar said that sales fell across the company’s business units, and it sees a similar percentage decrease in end-user demand in the third quarter.

The drop in sales eclipsed a 25% reduction in total operating costs, which helped prop up adjusted profit in the second quarter at $1.03 a share, topping the 65-cent average analyst estimate. Dealers reduced inventories by $1.4 billion during the quarter, and the company expects that to increase to over $2 billion for the full year.

“Analysts are going to be really tempted to extrapolate the earnings beat into the next couple of quarters, but Caterpillar’s management is being cautious and trying to keep analysts from doing that,” Matt Arnold, an analyst at Edward Jones, said in a telephone interview. “It’s probably appropriate.”

Caterpillar, considered an industrial bellwether, has been cutting costs and paring production to shore up profit. But as signs of stabilization and incremental improvement begin to emerge, the focus is likely to turn toward the trajectory of a recovery, Bloomberg Intelligence said this month.

The report comes amid tentative signs of recovery in some of the main markets for the company’s signature yellow machines. Miners have expressed a modicum of optimism as they continue churning out metal despite virus outbreaks. And manufacturing indexes are pointing to some gains in major economies including China.

To be sure, Caterpillar Chief Executive Officer Jim Umpleby tempered analysts’ expectations by reminding them a lot of uncertainty remains about the virus.

“It’s very much a fluid, dynamic situation,” he said on the earnings call. “It’s difficult for me to really predict any area other than right now.”

The second-quarter announcement comes after Caterpillar had extended plant closures for longer than expected, in a signal that the economic recovery was progressing slowly.

Bonfield said Friday in a telephone interview that the company will do more factory shutdowns as needed to respond to demand changes.

Intelligent Fashion Doc Profiles the Man Without a Face

The Great Escape from France

We know you’re feeling invincible, Democrats, but don’t count those chickens just yet

Our healthcare system is not remotely ready for ‘post-Covid’ America

a 13% decrease in 2 weeks. Public-health experts say the system is broken.