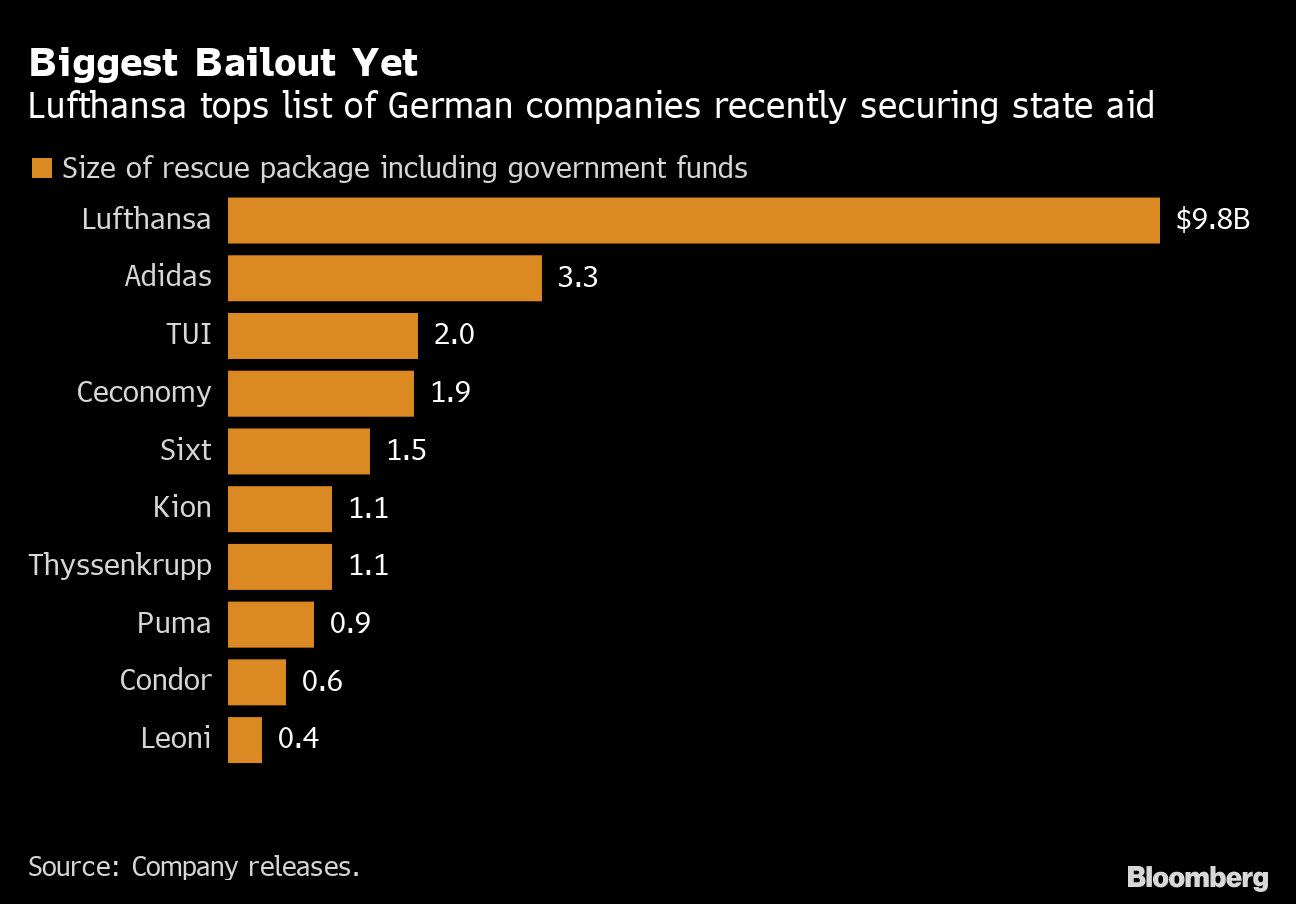 (Bloomberg) — Germany will offer Deutsche Lufthansa AG a 9 billion-euro ($9.8 billion) bailout that thrusts the state back into the heart of a company privatized with fanfare two decades ago.

The aid package involves taking an initial 20% stake that could rise to a blocking minority of 25% plus one share in the event of a hostile takeover, the carrier said in a statement on Monday. The plan, which requires European Union approval and will almost certainly be challenged by rival airlines such as Ryanair Holdings Plc, gives Germany an effective veto over company strategy.

German Finance Minister Olaf Scholz said the state’s investment would be temporary, but he also stressed that the timing of an exit would depend on the pace of Lufthansa’s economic recovery.

“When a state spends that much money, it has the obligation to make sure that this investment does not come at the taxpayers’ expense,” Scholz said.

Like airlines the world over, Lufthansa is fighting for survival as restrictions to contain the coronavirus puncture a decades-long aviation boom. The company plans to operate fewer aircraft when flights resume and is closing discount arm Germanwings to resize for what it warns could be years of depressed demand.

The package represents the biggest corporate rescue in Germany during the pandemic crisis. It’s also the only one that involves a direct investment by Chancellor Angela Merkel’s government, but more may be coming. The government set up the 100 billion-euro fund to buy stakes in stricken companies as part of its effort to stabilize Europe’s largest economy.

As part of the deal, the government will pay about 300 million euros for new Lufthansa stock at the discount price of 2.56 euros, the nominal value of its shares on the balance sheet. Lufthansa shares, which have nearly halved this year, closed at 8.64 euros in Frankfurt trading.

The deal also includes a 5.7 billion-euro investment via a so-called silent participation — a debt-equity hybrid instrument that wouldn’t dilute shareholder voting rights. The company will pay a guaranteed dividend on the investment of 4% in 2020 and 2021, rising to 9.5% in 2027. A portion of the silent participation can be turned into 5% of Lufthansa’s stock if the company doesn’t pay the guaranteed dividend, according to the statement.

The state will also back a three-year loan of 3 billion euros.

The government aims to sell its stake by the end of 2023. Exiting the holding depends on Lufthansa repaying the aid and the share price being above the purchase price plus interest.

Merkel’s government has been eager to avoid losses suffered on bank bailouts after the 2008 financial rout, while safeguarding links to far-flung markets on which the export-led economy depends.

Lufthansa had already secured aid from Switzerland for its unit there in the form of credit guarantees worth 1.28 billion Swiss francs ($1.3 billion) and is negotiating separate packages for divisions in Austria and Belgium.

As part of the bailout, Germany isn’t allowed to interfere in day-to-day operations but will get to fill two seats on Lufthansa’s supervisory board. The representatives will be “independent experts” rather than government officials, a point of contention as the company pushed back against state influence.

While Lufthansa’s management board accepted the offer, the company’s supervisory board will debate and vote on the package before asking shareholders to do the same at an extraordinary general meeting. Europe’s largest airline last week warned that it required “urgent” assistance after the fallout from the coronavirus grounded most of its fleet.

As part of the deal, Lufthansa will continue to reduce its per kilometer emissions by investing in cleaner aircraft and buying alternative fuels where possible, according to the Finance Ministry statement. Lufthansa’s total greenhouse gas emissions rose to a record last year as improvements in fuel efficiency were overshadowed by an increased number of flights, according to the firm’s 2019 sustainability report.