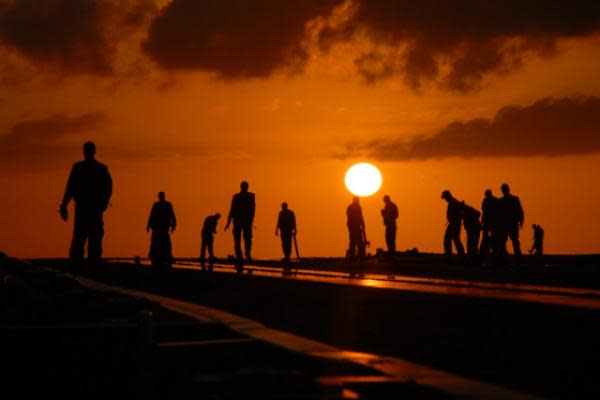 The market stumbled Friday, and that could be spilling into the new week. It doesn’t help that stocks mostly turned lower in Europe and Asia earlier today, with the exception of China. A rekindling of U.S./China trade tensions last Friday might still be rattling Wall Street today.

Also, crude surrendered some of last week’s gains, and the 10-year yield is hanging out near 0.6%, a few basis points below recent highs. Volatility is going in the wrong direction, too, for anyone who’d like to see less choppiness.

Unfortunately, the week ahead might not offer much solace as analysts anticipate the most dreadful monthly jobs data any of us have ever seen. This coming Friday’s payrolls number hangs over the market like an albatross.

Earnings Week Brought to You by Disney and GM

This is a big week for data, but maybe not as exciting on the earnings front. Obviously, companies continue to report, but the biggest wave of closely watched, trillion-dollar firms crested last week, leaving a long list of smaller companies reporting in their wake.

Earnings aren’t all pint-sized this week, however. The Walt Disney Company (NYSE: DIS) and General Motors Company (NYSE: GM) both step up to the plate, among others. It could be interesting to see how DIS is coping with the pandemic, mainly because of the shuttering of its theme parks, which form a big chunk of revenue. Movie theaters being closed could pose another challenge.

But DIS is also an entertainment streaming company and has a deep bench of well-loved titles which could be helping it out as people stuck at home want to binge watch entertainment online. It looks like DIS picked the right year to launch Disney + last fall, though at the time executives couldn’t have known just how good the timing would be.

As for GM, the company has halted U.S. production, and people may be less likely to buy big-ticket items like cars as unemployment rates skyrocket. GM also has a huge market in China, so this might give investors a chance to hear how the recovery is going there as some states begin reopening here.

Auto sales in April hit the brakes big-time for most of the major automakers that reported monthly tallies last week. Some companies saw 50% or worse declines. GM reports sales quarterly, not monthly.

Industrywide, analysts estimate U.S. auto sales fell more than 50% last month over the prior year and that the selling pace was its lowest on record since at least 1979, according to The Wall Street Journal. However, there were some signs of life at dealers as April advanced. GM executives can hopefully provide more insight on their call.

While ground vehicles get some attention this week, so do airplanes. News over the weekend that Warren Buffett sold his stakes in the four largest U.S. airlines could weigh on that beaten down sector today. It’s been a rough year for Buffett’s Berkshire Hathaway, Inc. (NYSE: BRK-A), too, for that matter. It’s down below $275,000 a share. Buffett’s company has more than $100 billion in cash but he told the media over the weekend that, “we don’t see anything that attractive to do” as far as new stock market investments.

On the economic calendar, Friday stands out with the release of non-farm payrolls for April. The number is bound to be abominable, following more than 700,000 job losses in March and several weeks of April jobless claims well beyond any seen in the past with numbers reaching the millions.

Investors shouldn’t overlook the pain this shutdown has caused so many, and Friday’s report is a big reminder. The number that day is probably going to look shocking, no matter how much anyone might feel prepared for it. That said, it’s possible the market is building some of that anticipated weakness in early this week.

Other data on the radar include March factory orders and another weekly unemployment claims number that’s likely to be closely watched.

Also, consider watching the 10-year Treasury yield. This metric, which rose 7% last week, remains near all-time lows as bonds remain popular with investors trying to manage risk in these uncertain times. If the 10-year yield can hold that 0.6% level in coming days, it could be interesting to see if it goes on to test recent highs above 0.7%, which might be a sign of investor hopes for improved economic performance.

Obviously these are incredibly low levels. Hoping for 0.7% is kind of like getting excited about a baseball team winning one game after losing 10 straight. Still, you’ve got to start somewhere, and hope springs eternal, as Cubs fans probably understand.

Rough Patch as May Opens

Last week brought to mind the old phrase, “Sell in May and go away.” As soon as the calendar page turned, the selling picked up steam. Still, anyone who bought in April probably came away happy after a brutal March.

May started in a rough patch with most of the major indices slightly down for the week. There was one winner in the clubhouse, however. The small-cap Russell 2000 Index (RUT) had a good week, rising just over 2%. The small-caps had struggled for a while, but they came away as a leader last week, helped by some of the smaller, regional banks. Those firms had a tough Friday, but not enough to put the RUT into the red.

Energy, surprisingly, also had a strong week despite getting absolutely pounded on Friday after some bad earnings data. Communication Services and Materials also performed well last week, but Utilities struggled, along with Health Care, Staples, and Consumer Discretionary.

Another surprise last week was seeing some of the cruise ship lines do well. A lot of younger investors have shown enthusiasm for some of these companies. Also, a couple of beaten down companies like The Gap, Inc. (NYSE: GPS) and Harley Davidson, Inc. (NYSE: HOG) had nice weeks. With spring weather finally arriving in the Midwest over the weekend, maybe people started getting wistful for an open ride down the highway and then a little summer clothes shopping.

Still, the market got burdened Friday by what some analysts call a case of failed leadership. Meaning companies like Amazon.com, Inc. (NASDAQ: AMZN) and Apple, Inc. (NASDAQ: AAPL) that had helped lead things higher kind of led everything back down as investors scrutinized their earnings reports.

AMZN tore the cover off the ball in terms of sales, but not necessarily in earnings. It’s also kind of interesting that AMZN’s cloud platform, Amazon Web Services, saw some growth deceleration even as Microsoft Corporation (Nasdaq: MSFT) Azure cloud business grew 59%. It looks like MSFT is presenting a big challenge to AMZN. Meanwhile, AAPL had a good quarter but there’s worry about the product cycle for 5G being delayed based on supply chain disruptions.

The market is arguably in better shape from a technical perspective than it was back in March. Recent selloffs tended to get met with buying interest amid positive feelings that the Fed has investors’ backs. That said, the S&P 500’s (SPX) test and failure to break through its 200-day moving average earlier this week could have weighed on stocks Friday, along with a failure to stay above the 2940 area, which was about where a long-term top was reached in the fall of 2018 before everything fell out of bed in the final quarter of that year.

CHART OF THE DAY: SPX HITS A HARD WALL. After the S&P 500 Index (SPX–candlestick) started moving higher than its 50% Fibonacci retracement level, all eyes were at the next resistance level—61.8%. It reached that level on Wednesday, went slightly above it, and then hit its 200-day exponential moving average (blue line). That was a hard wall to break through. SPX has moved lower since then and is now heading toward its 50% retracement level. Data Source: S&P Dow Jones Indices. Chart Source: The thinkorswim® platform from TD Ameritrade. For illustrative purposes only. Past performance does not guarantee future results.

Gotta Have Turnover: One thing being overlooked as some states reopen is how hard it’s going to be logistically for retailers to get back to where they once were. Everyone’s already heard about airplanes not selling middle seats, but the retail industry also faces some issues. Even states reopening may still want shoppers to stay six feet apart at grocery stores and advise managers to have fewer cashiers and baggers on site to maintain separation. This has resulted in long lines at many supermarkets, and also in people piling up their carts because they go less often and don’t just run over for a few items the way they used to. The combination of loaded carts, six-feet separations, and fewer checkout aisles being open can lead to slower operations and perhaps fewer shoppers being processed per hour. Any restaurant or grocery store chain knows a lot of the profit comes from having quick turnover. In this current environment, that might be hard to do. The result? Maybe compressed profits.

FOMO Club: With rates at virtually zero stretching out to the horizon, investors who don’t want to hide their money under the bed just don’t have as many places to go and they might be suffering a collective case of fear of missing out (FOMO). Government bonds aren’t yielding much more than the cash under the bed approach, and corporate bonds seem a bit shaky to some analysts who warn of potential bankruptcies and defaults for some of the companies paying higher yields. There’s nothing wrong with high-quality corporate bonds of companies with solid cash flow, but investors should consider more caution than usual with any bonds that are high yield but low rated. Government bonds aren’t anything to shake a stick at either despite their featherweight yields, by the way. Fixed income definitely has a place in most peoples’ portfolios, though no investor is exactly alike.

Pit Stop Halted: Those of us who remember the glory days of Chicago pit trading back in the 1980s and 1990s welcomed Friday’s news that the Cboe Global Markets (CBOE) plans to reopen its floor on June 1. The average person who thinks about so-called “open outcry” trading probably gets a picture in their head of a bunch of yelling, red-faced guys standing face-to-face and toe-to-toe, probably a great breeding ground for the virus. However, pits are less crowded these days because most trading gets done electronically, and the Cboe said it’s going to emphasize safety. The Cboe reported near-record trading volume in Q1 as the markets boiled and bubbled, which makes some people wonder why not just go fully to electronic trading since it seems to work pretty well. Not so fast, Cboe CEO Ed Tilly told reporters Friday. “Our customers haven’t found that satisfaction yet (with all-electronic trading) and still have great utility in the floor,” Tilly said, according to Crain’s Chicago Business. Three cheers from this former floor trader!

© 2020 Benzinga.com. Benzinga does not provide investment advice. All rights reserved.