The Louisiana coast is staring down the double barrel of a hurricane shotgun. It could be about to experience something that has never happened before — two Atlantic hurricanes making landfall within hours and miles of one another.

For weeks, the nation’s weather forecasters, public and private, have been warning that this hurricane season was about to get ugly. Earlier this year, the National Oceanic and Atmospheric Administration predicted a worse than average hurricane season. But two weeks ago NOAA’s National Hurricane Center revised its prediction upwards to as many as 25 named storms, of which up to six could be major hurricanes.

The forecast took on particular urgency due to the COVID-19 pandemic stretching health care and first-responder resources to the breaking point. Unfortunately, we are not ready for what is about to hit us.

Marco, the 13th named storm of the season, became a hurricane on Sunday and was expected to make landfall in Louisiana late Monday. Laura, the 12th named storm, will likely blast ashore in the state Wednesday.

Why is this happening? Because the Gulf of Mexico is unusually warm this year  —  and so is the entire nation. And the weather pattern we are stuck in is supercharging every storm and extreme event.

Just look at the damage caused by Isaias, a relatively mild hurricane that came ashore Aug. 3 along the strom battered storm-battered North Carolina coast. But the damage was much worse, and unexpectedly so, up the coast all the way from the Eastern Shore of Maryland into New England.

And if it were just the hurricanes that would be bad enough, but this summer has been especially horrific. In August alone we have seen record heat throughout the Mountain West and desert Southwest, a “derecho” or inland hurricane-like storm that blasted across the plains and into the Great Lakes region and left a path of destruction unlike anything in recent memory. Then there is freakish weather — dry lightning “storms” causing wildfires to burn out of control, creating one of the worst fire seasons in California’s history.

When I was the deputy administrator of NOAA under President Barack Obama, we believed that climate change was making our weather more severe, but we were cautious about directly connecting those dots. We looked at the data and realized that our storms were increasingly impactful and costly. We started publicizing the number of “billion dollar storms” and tweeting about severe weather to better warn the public in real time when their city or region was about to get walloped. But still the agency was cautious not to attribute any one storm or event to climate change.

What a difference 12 years makes.

Now the public can and does see for itself that climate change is altering our weather patterns and wreaking havoc on people’s lives today. Not a section of the country has been spared a climate change-related devastating event in just the month of August alone.

And yet President Donald Trump is doing almost nothing to help his fellow Americans. Power outages stretch on for days and weeks during the hottest summer in memory — either because of storm-damaged power lines, wildfires or brownouts due to surges in demand in the hottest parts of the country. State and local governments are cash strapped and can’t keep up, yet the president refuses to provide emergency funding relief to them.

There are so many wildfires burning out of control that California does not have enough firefighters to keep people and property safe. When asked whether he would help, Trump blamed the state for not “cleaning its floors.” He visited his New Jersey golf course this month just after Isaias hit the northeast but did not have time to survey the nearby damage. Vice President Mike Pence visited Iowa, but did he make time to actually see the cornfields flattened by the derecho? Nope.

Trump’s major “contribution” to severe weather response is to try to divert money from disaster relief to pay for legally dubious executive orders he made by fiat for COVID-19-response. No prior administration, Democratic or Republican, would have been so apathetic or nonresponsive when faced with this parade of weather disasters. The White House Situation Room would be abuzz of activity. The deputies of all the relevant government agencies would meet there daily to discuss how to respond in real time to the crises of the day — where to send reinforcements and where to send funds. The president and vice president would receive briefings numerous times a day and would visit the worst areas to see them for themselves.

This was the way we dealt with it when the Gulf was hard hit by a disaster 10 years ago. I visited the region with Vice President Joe Biden during the Deepwater Horizon oil spill. I saw his compassion on display as he talked to its victims — fishers and coastal small business owners who had been devastated. He gave speeches, but more important, he met face to face with the people who came to see him and spoke to them in rope lines and on the docks.

That’s the kind of president we need now. One who recognizes the crisis and feels the pain of those dealing with it.

The current president might think that with his Sharpie that he can “script” where severe storms go. But I doubt he can Sharpie his way out of this one-two hurricane punch.

It is what it is.

Monica Medina is a former principal deputy administrator at the National Oceanic and Atmospheric Administration in the Obama administration and the co-founder and CEO of Our Daily Planet, an environmental daily e-newsletter. Follow her on Twitter: MonicaMedinaDC

You can read diverse opinions from our Board of Contributors and other writers on the Opinion front page, on Twitter @usatodayopinion and in our daily Opinion newsletter. To respond to a column, submit a comment to [email protected] 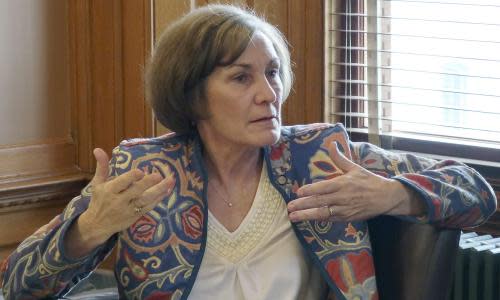