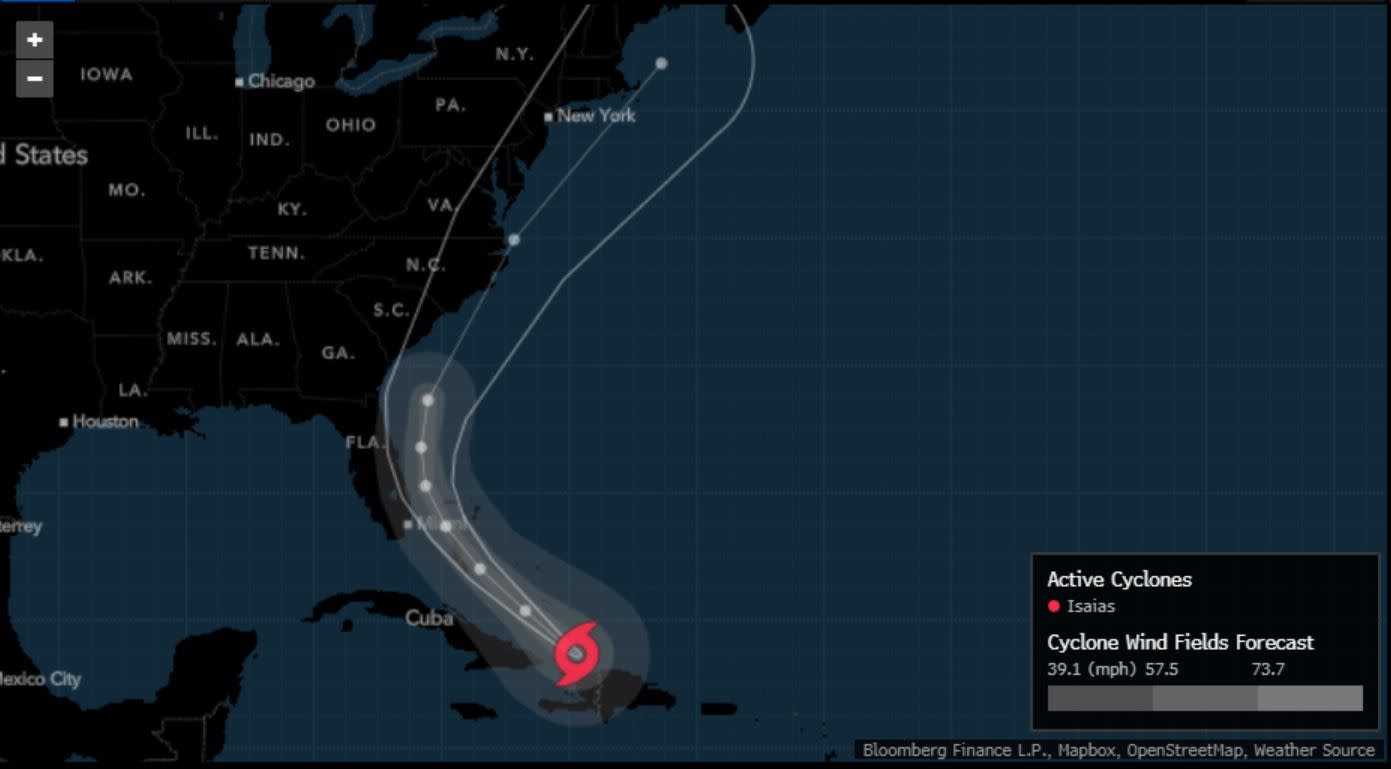 (Bloomberg) — Hurricane Isaias edged closer to Florida on Saturday, adding to woes for a state grappling with record cases of Covid-19, and potentially causing $3 billion in economic losses as it lashes the eastern seaboard.

Winds dipped to 75 miles (121 kilometers) per hour, barely high enough to maintain it as a Category 1 hurricane on the five-step Saffir-Simpson scale. Isaias was moving into the Florida Straits about 125 miles southeast of Miami, the National Hurricane Center said in a 2 p.m. EDT advisory.

Hurricane warnings stretch along Florida’s east coast; Governor Ron DeSantis and President Donald Trump declared an emergency. NASA may have to delay the return flight of two astronauts from the International Space Station planned for Sunday given the conditions.

The hurricane swept across the Bahamas, weakening as it did so, but it’s expected to strengthen again as it crosses the warm water in the Florida Straits and Gulf Stream.

“Hurricane conditions area expected to reach the coast within the hurricane warning area in Florida tonight and will spread northward through Sunday,” the NHC said in its advisory. “Preparations to protect life and property should be rushed to completion.”

Florida’s daily Covid-19 death toll rose to a record earlier this week. Officials in Florida’s coastal counties are distributing sandbags and telling residents to shelter in place. Coronavirus testing along the east coast has been halted until Aug. 5.

Isaias’s eye will make its closest approach to Florida’s coast on Sunday and “it’s still very worrisome that it can brush or move inland anywhere from West Palm Beach to Daytona,” said Rob Miller, a meteorologist with AccuWeather Inc. The eye wall, with some of the storm’s strongest winds, could actually buffet the coast without Isaias ever officially making landfall.

Even as a Category 1 hurricane or a tropical storm, Isaias could cause financial hardship to the East Coast, which could be made worse by Covid.

The storm will cause some disruptions at four of the largest ports in the U.S., taxing supply chains, said Lou Gritzo, a vice president and manager of research at insurer FM Global. It also raises issues for people working from home if they face extended power outages.

“Having power and the critical infrastructure of home internet is now more important that ever,” Gritzo said.

All of these things could add to economic losses that could reach $3 billion, said Chuck Watson, a disaster modeler with Enki Research.

Flooding is likely to spread through North Carolina and into Virginia. That could have an impact on cotton crops in North Carolina, said Don Keeney, a meteorologist with Maxar.

After it passes Florida, Isaias could weaken to a tropical storm by the time it comes ashore near Cape Fear, North Carolina, late Monday, Miller said. It will likely then move back over the Atlantic before making a second landfall in New England.