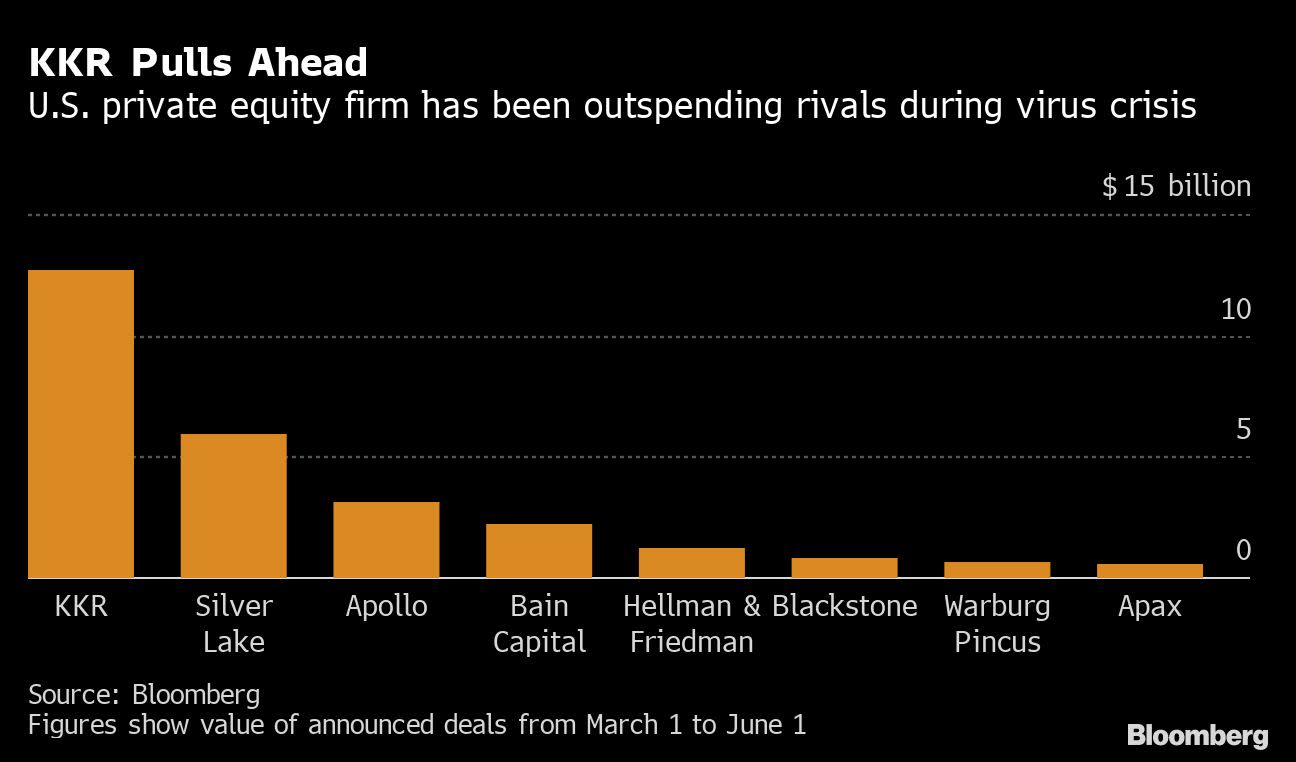 The plot contained a massive market dislocation, financing shutdown and uncertain future for company earnings. That was during the great financial crisis, which KKR could have played better, according to Johannes Huth, its top dealmaker in Europe.

“There’s a conscious effort on our side to not repeat our shortcomings of 08/09 in terms of deploying capital,” he told Bloomberg on a video call. “Very early on, before markets hit all-time lows, we’ve said we really need to take advantage of this crisis.”

It has wasted little time. KKR has been the most-active private equity house globally since the coronavirus crisis took hold of markets at the start of March, deploying $12.7 billion, according to data compiled by Bloomberg.

With many in private equity taking a cautious approach to acquisitions through the downturn, KKR has spent more than three major rivals combined — Silver Lake Management, Apollo Global Management Inc. and Blackstone Group Inc. Silver Lake has been the second-busiest acquirer, with $5.9 billion in deals during the period, the data show.

In mid-March, as virus lockdowns came into force, KKR’s infrastructure team acted fast to buy waste-management business Viridor Ltd. for 4.2 billion pounds ($5.2 billion) from Pennon Group Plc. It was the biggest carve-out at a publicly traded U.K. company since 2018.

A similar deal was struck in May, when KKR agreed to acquire the Wella and Clairol beauty brands from U.S. cosmetics company Coty Inc. in a $4.3 billion transaction that includes a $1 billion investment in Coty.

KKR is also one of three firms offering to take control of the Spanish phone carrier Masmovil Ibercom SA for 3 billion euros ($3.3 billion) in what would be one of the biggest take-privates of the pandemic.

By deploying capital in a downturn, KKR is seen to be following a strategy practiced by renowned investors such as Warren Buffett during the 2008 crash, according to people who have worked with the firm on deals. Buffett backed companies including General Electric Co. and Goldman Sachs Group Inc. with billions of dollars at the time — bets that were rewarded when equity markets entered a historic bull-run.

The firm founded in 1976 by Jerome Kohlberg, Henry Kravis and George Roberts is best known for leveraged buyouts — a reputation immortalized in the 1989 book and subsequent film “Barbarians at the Gate,” which chronicled its hard-fought takeover of the U.S. tobacco and food company RJR Nabisco.

The coronavirus crisis has stifled the world’s financing markets and this, coupled with $58 billion in uncalled commitments from investors, means KKR has been spurred into writing unusually large equity checks for its recent buying spree.

“I’ve seen this movie before in 2007,” said Huth. “The dislocation of the financing markets may take one or two years. So we finance deals very conservatively, or entirely with equity, and then when markets are back we refinance.”

KKR manages assets of $207 billion across a range of strategies and is tapping its varied pools of capital to help diversify away from leveraged buyouts.

In April, the firm decided to reboot an unsuccessful credit fund in an effort to scoop up bonds and loans souring amid the crisis. A month later, it said it would use $1 billion from its third global infrastructure fund to build data centers in Europe.

“What’s currently happening in public markets isn’t reflecting current value for some companies that we know well and so we take the strategy of investing in toeholds in a number of companies,” said Huth.

The public markets weren’t kind to KKR during the last crisis, disrupting a planned initial public offering in 2007. Adding to the sting at the time was the fact that rival Blackstone successfully went public prior to the meltdown. KKR eventually listed three years later.

Its share price has fallen 3% in virus-hit markets the year, giving the firm a market value of $24 billion. In the first quarter, its private equity portfolio fell 12% as companies became squeezed by the pandemic; one KKR asset that has been struggling is vending machine operator Selecta.

KKR Co-President Scott Nuttall said in May: “We find ourselves in the fortunate position of being ready as a firm this time to not only play defense but also playing more offense and we’ve been doing a lot of both.”

The firm has multiple calls throughout the week with Covid-19 point people at the companies in which it invests and has separate teams to keep track of available government support and potential debt repayment issues, according to Huth. Having these measures in place has given KKR the confidence to pursue bold dealmaking, he said.

“We are going to continue to invest in this environment,” said Huth. “You have to take that risk but that’s also what our investors give us money for.”