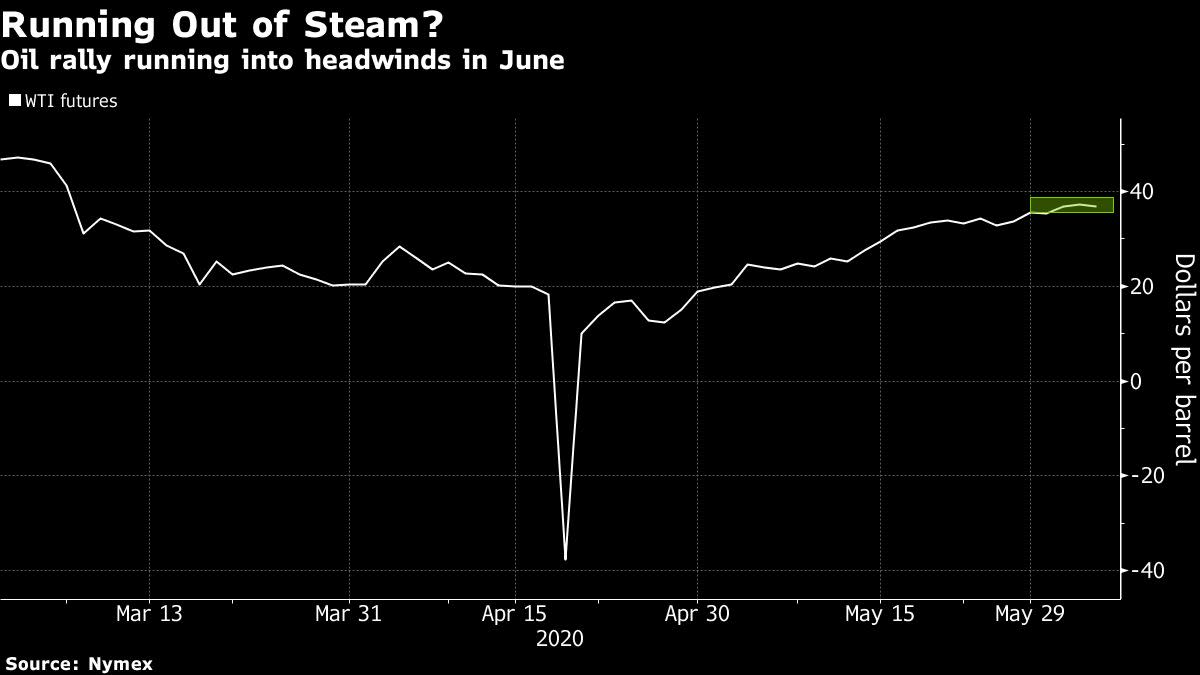 (Bloomberg) — Oil retreated from a three-month high as OPEC+ unity was threatened by a long-running feud over complying with production cutbacks, while U.S. data cast doubt on the strength of the demand recovery.

Futures in New York fell around 2% to below $37 a barrel after closing at the highest since March 6. Saudi Arabia and Russia have reached a preliminary deal to extend output curbs for an extra month, but it’s conditional on other members making deeper cuts in the months ahead to make up for past non-compliance, people familiar with the matter said. The two leading producers have lost their patience with the errant behavior of the next-biggest, Iraq.

Meanwhile in the U.S., diesel demand fell to a 21-year low last week and gasoline stockpiles swelled, according to Energy Information Administration data. The figures suggest that fuel consumption in the world’s largest oil consumer isn’t recovering as quickly as previously anticipated.

While oil prices have rebounded rapidly since mid-April, the rally is faltering amid several headwinds. The White House is suspending passenger flights from Chinese airlines as relations between the world’s two biggest economies continue to worsen, while civil unrest across the U.S. is complicating the economic recovery from the virus and risking a second wave of infections.

West Texas Intermediate for July delivery dropped 1.7% to $36.65 a barrel on the New York Mercantile Exchange as of 7:36 a.m. in London after rising 1.3% on Wednesday. Brent for August settlement declined 1% to $39.39 on the ICE Futures Europe exchange after trading above $40 for the first time in almost three months in the previous session.

“The OPEC+ decision will be key for price direction over the next week, with a potential extension providing some limited upside,” said Warren Patterson, head of commodities strategy at ING Bank NV. However, there’s a disconnect between the rise in oil prices and weak refining margins, suggesting the rally has gotten a bit ahead of itself at least in the near term, he said.

Riyadh and Moscow are aligned on continuing cuts at the current level for an extra month beyond July 1. But if they don’t receive assurances from Iraq and the other laggards at their next meeting — scheduled for June 9-10 — the group’s daily supply curbs will ease to 7.7 million barrels for the rest of 2020.

The OPEC+ disagreements are coming to a head as higher prices have already spurred some U.S. producers to bring wells back online. EOG Resources Inc., America’s largest shale-focused producer, and Permian driller Parsley Energy Inc. are preparing to ramp up output just weeks after turning off the taps.