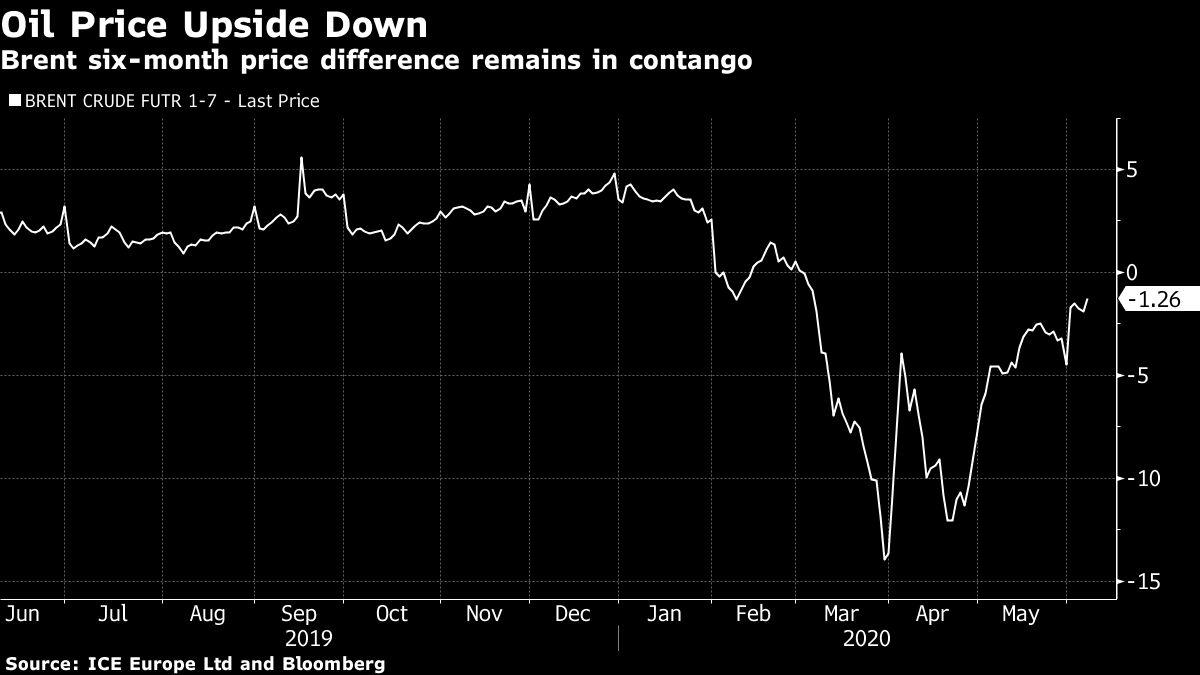 (Bloomberg) — On the surface, it’s the old OPEC strategy of production cuts. When the cartel and its allies meet on Saturday, they are set to extend their output curbs for an extra month into July in an effort to consolidate the price recovery.

But a closer look shows subtle changes that point to Saudi Arabia, Russia and their OPEC+ allies adopting a more sophisticated approach: trying to flip the shape of the oil price curve upside down. In many respects, the cartel is borrowing from the playbooks of the world’s top central banks, where policy makers often focus on the interplay between long- and short-term interest rates.

The alliance, which includes 23 of the world’s oil-rich nations, has traditionally targeted a reduction in inventories. But now it’s also actively focusing not just on stockpiles but also on the shape of the oil curve, designing policy to influence short-term prices relative to those further in the future, according to a delegate.

The idea within OPEC+ is to try to push near-term, or spot prices, higher than forward contracts, a structure known among traders as backwardation, the delegate said. In short, OPEC wants oil today to be more sought after than oil for delivery months or years in the future, encouraging refiners and traders to take crude out of inventories.

“This marked a departure from previous aims to draw down inventory, a more subtle way of communicating it,” Eagle Commodities Brokers Ltd, an oil brokerage, said in a note to clients.

The shift, first reported by Bloomberg on Friday, could have important implications for U.S. shale producers, who benefit from higher longer-dated prices as they use them to hedge their future production. While front-month West Texas Intermediate remains slightly below $40 a barrel, the price of 2021 is trading higher. The price for 2022 is almost $42.50 a barrel.

The Brent price curve remains in contango, the term for a market where long-term oil is more expensive than short, although earlier this week the front of the curve briefly flipped into backwardation. The price difference between contracts for delivery now and in six months remains in contango, although it has narrowed significantly over the last two months.

Controlling the shape of the curve is difficult, and would require OPEC+ to make short-term adjustments to its output, reacting quickly to changes in supply and demand. But there are signs OPEC+ is adopting a more nuanced policy approach, extending its deep output cuts by a single month, rather than committing to a longer period.

“We expect such a strategy to limit price upside into year-end and cap long-dated prices, helping achieve the backwardation,” Damien Courvalin, oil analyst at Goldman Sachs Group Inc., said in a note to clients.

For the OPEC+ alliance, the ideal scenario would be to move the shape of the curve from its current contango, when near prices are lower than future prices, into a mild backwardation, with spot prices higher than forward ones. The cartel’s preference is a shallow backwardation of about 20-30 cents per barrel per month. Right now, the West Texas Intermediate is on a mild contango of 15-20 cents per barrel per month.

“We believe that OPEC remains focused on sustainably increasing revenues through a combination of higher prices but also higher market share,” said Courvalin of Goldman Sachs. “Structurally, this comforts us in our long-held view that OPEC will start targeting backwardation rather than high prices alone.”