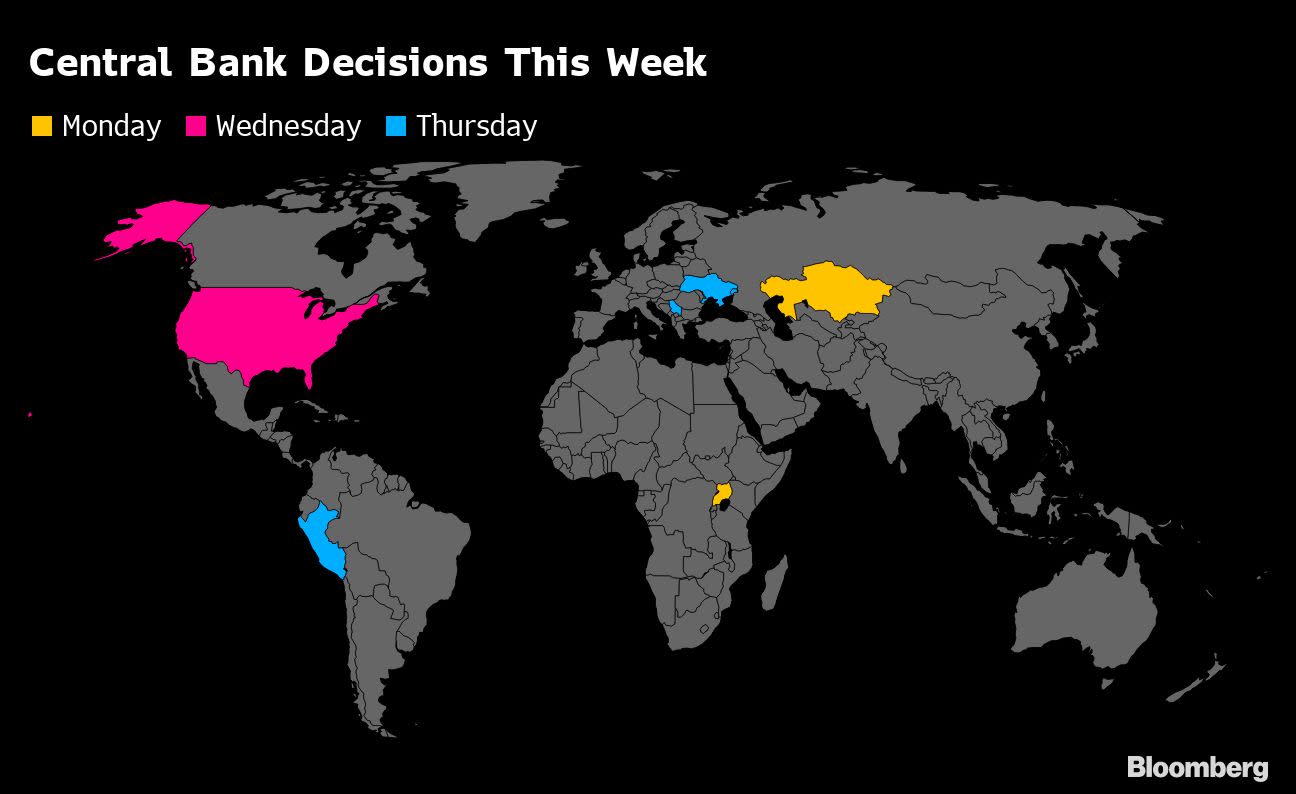 (Bloomberg) — Federal Reserve Chairman Jerome Powell will be on hand to offer reassurance to investors this week that he’ll keep policies in place to aid the U.S. economy at a bleak moment of recession, disease and civil unrest.

Fed officials — who have already unleashed a torrent of liquidity to ease financial market strains — are not expected to augment their guidance for interest rates to stay near zero until the economy is back on track, despite a better-than-expected reading for the jobs market in May. But Powell’s press conference on Wednesday will be closely watched for hints on how much more, if any, further stimulus he thinks will be needed.

Yield-curve control, where the Fed targets asset purchases to cap yields on Treasury bonds, is among the tools they’ve discussed in the past. More broadly, Powell can expect questions on whether signs the worst may be over for the economy means the Fed can start thinking about withdrawing some of its emergency support, or if more is still needed. That could focus attention on a shift in its bond-buying strategy to deliberately target easier financial conditions. The Fed is currently buying bonds to ensure smooth market functioning and has scaled back daily purchases sharply since the opening days of the pandemic.

“The Fed’s Main Street Lending Program, which is in the process of coming online, arrives at a critical time when the economic recovery will heavily rely on policy support. The trajectory of the recovery in the second half of the year remains highly uncertain and will depend on policy makers’ actions. At the post-FOMC meeting press conference on Wednesday, Powell will stress the central bank’s willingness and ability to provide additional stimulus.”

This week also sees European Central Bank President Christine Lagarde questioned by lawmakers, just a few days after her institution boosted its stimulus program. The World Bank and the Organization for Economic Cooperation and Development are scheduled to publish their latest economic predictions.

Click here for what happened last week and below is our wrap of what else is coming up in the world economy.

Economic indicators in focus will include CPI and the latest weekly jobless claims. The University of Michigan’s consumer sentiment data out Friday will also be watched for any impact from widespread protests and unrest in the U.S.

For more, read Bloomberg Economics’ full Week Ahead for the U.S.

The week kicks off with Japan releasing revised economic growth figures that are likely to show a smaller than initially estimated contraction due to better than expected business investment. Data from China on Wednesday is forecast to show a deepening in factory deflation and moderation in consumer price inflation in May. And inflation data from India on Friday will be watched for signs of moderation that may give room for additional monetary easing.

For more, read Bloomberg Economics’ full Week Ahead for Asia

ECB policy makers will have another opportunity to explain the reason behind the bigger-than-expected increase in emergency bond buying when they speak this week. In addition to Lagarde, the list includes Executive Board members Luis de Guindos and and Isabel Schnabel. In Sweden, Governor Stefan Ingves is set to deliver remarks on the Riksbank’s monetary policy toolbox.

Uganda’s central bank could ease again on Monday after inflation slowed to a seven-month low in May. On Thursday, Ukraine’s central bank is expected to cut rates. Serbian and Kazakh policy setters also meet.

On the data front, industrial production figures for April from Germany, France, the euro area and the U.K. will give a glimpse of the damage under full lockdowns. Turkey publishes March unemployment and April current-account balance and industrial production numbers. Norway releases its unemployment data for May and Moody’s publishes its latest rating of the country’s sovereign debt.

The International Monetary Fund is expected to approve a $5 billion loan to Ukraine on Tuesday and disburse the first tranche of $1.9 billion to help cover budget deficit. On Thursday, finance ministers of four major East African economies will presents their budgets for 2020-2021, along with plans to boost output battered by the coronavirus.

For more, read Bloomberg Economics’ full Week Ahead for EMEA

Crushing pandemic-induced recessions across Latin America mean that for the time being inflation is a battle for another day. Certainly, that’s the case with the region’s three largest economies this week: inflation will inch up closer to the center of Mexico’s target range, revisit multi-decade lows in Brazil and near about 45% in Argentina — all with no effect on easing cycles yet to meet a lower bound.

Unsurprisingly, demand and output indicators regionally have been cataclysmic, suggesting that April readings for Mexico’s industrial output and Colombia’s retail sales will post double-digit declines to rival the worst of the Great Recession.

Peru’s central bank will keep its key rate at 0.25%, the lowest in emerging markets after Israel, as about 80% of the economy is out of lockdown and slowly getting back to work.

For more, read Bloomberg Economics’ full Week Ahead for Latin