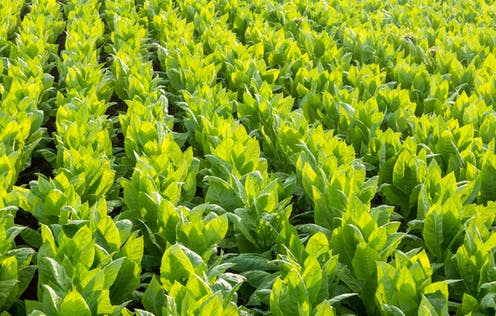 We don’t know how long it will take to find a vaccine for COVID-19, but we do know this: if and when we find one, there will be unprecedented demand for the molecules that go into it.

Several different types of vaccine are currently being researched. These include those that use inactivated forms of the virus itself and molecules that look like the virus. The body recognises these molecules when they are injected and produces proteins called antibodies that protect us from threats like viruses. It may also be possible to treat COVID-19 patients with antibodies directly.

All of these approaches will require us to mass-produce active molecules, and quickly. But how do we do that? The question predates our current pandemic.

Last year, the search for an answer took us to the tobacco fields of Spain and Italy because, as strange as it sounds, the tobacco plant might provide a novel way to meet this huge demand.

For a number of years, however, researchers have demonstrated that plants can act as bioreactors just like cell cultures. Plants have been a rich source of pharmacologically important compounds throughout history, but it has only recently become possible – thanks to biotechnology – to modify plants to grow important compounds in a targeted way. This is known as “pharming”.

Not only might this be a cheaper way to produce in-demand molecules, but, potentially, vastly more scaleable.

If plants can be harnessed for this purpose, it could lead to new industries and alternatives for pharmaceutical companies. Lower and middle income countries could particularly benefit from this low-tech option, because cell culture alternatives require greater upfront investment. To this end, dedicated pharming facilities have recently opened in Brazil and South Africa.

Pharming for molecules is not restricted to medical applications, either. It’s also possible to grow nutritional, cosmetic and industrial molecules in plants.

The lab mouse of the plant world

It may seem counter-intuitive that the answer to a global pandemic could be produced in the leaves of one of the world’s most deadly plants. But there are good reasons why the tobacco plant, Nicotiana tabacum, and its relative N. benthamiana are common plants for pharming.

Both are easily modified and together they have become known as the lab mice of the plant science world, in part due to tobacco’s economic importance.

Tobacco has all the properties we need when selecting a pharming platform: it is quick-growing, leafy and there are people familiar with growing it all over the world. Several laboratories have already seen success in using it to grow antibodies for the treatment of HIV and the Ebola virus.

So it’s perhaps no surprise that British American Tobacco recently announced its ambition to produce between one to three million doses of a potential coronavirus vaccine using tobacco.

These efforts rely on contained, indoor production. But to produce at scale, we would need to pharm outdoors. That’s why we visited Spain and Italy – two of Europe’s largest producers of tobacco – last year, in order to speak with farmers and their cooperatives to see if they would be interested in becoming pharmers. The response, which will be published in a forthcoming research paper, was largely positive. Tobacco farmers saw this as an opportunity to increase profit in a shrinking European market and de-stigmatise a crop they want to keep growing.

Don’t bet the pharm yet

Pharming is not without its problems, some of which go beyond the technical.

It has been a long road since the first plant was used a vehicle for pharming, partially because of the need to demonstrate that plant-derived molecules are as safe and reliable as those that come from cell cultures, which we understand far better and are already the preferred platform for pharmaceutical companies.

But it is also because pharming requires genetic modification, a famously controversial issue with the public. (Concern over genetic modification does not appear to extend to cell culture technologies, which also often rely on modified microorganisms.)

European legislation is a huge barrier. This means pharming is currently confined to heavily controlled spaces such as laboratories and has limited one of pharming’s greatest assets: the fact that it could be done at large scale in open fields.

The strict rules around pharmaceutical production also pose a big challenge for outdoor pharming, despite the fact that at least one US-based company has demonstrated that it is possible to produce therapeutic molecules in the field.

Combining biotechnology with a crop surrounded by considerable controversy for understandable reasons could prove equally challenging, especially if Big Tobacco companies are involved.

But the potential is there for us to produce vaccines and therapeutics safely and at scale, using the tobacco plant for good instead of harming people’s health. And as COVID-19 sweeps the globe, there’s never been more of a need to do so.

This article is republished from The Conversation under a Creative Commons license. Read the original article.

Julian Ma is a scientific advisory board member for Leaf Systems. He receives public research funding from the European Commission through its Horizon 2020 programme and is supported by the Hotung Charitable Foundation. His is a member of the Organising committee for the International Society for Plant Molecular Farming.