GAITHERSBURG, Md. — A U.S. biotechnology company is moving its experimental COVID-19 vaccine into final-stage testing in Britain, a different kind of shot than other leading candidates.

Novavax Inc. announced Thursday that the Phase 3 study getting underway in the United Kingdom aims to test up to 10,000 volunteers, at least a quarter of them over age 65.

In mid-October, the company is set to begin another, much bigger final study in the U.S. that will recruit 30,000 people.

The Novavax shot is what’s called a recombinant vaccine, made with lab-grown copies of the “spike” protein that studs the surface of the coronavirus. Study participants will receive two doses of vaccine or a dummy shot.

HERE’S WHAT YOU NEED TO KNOW ABOUT THE VIRUS OUTBREAK

— Is it the flu? With cold weather coming to the Northern Hemisphere, people want to know how to distinguish symptoms

— Many at U.N. summit plead for a COVID-19 vaccine to be available and affordable to all, but their appeals are likely in vain

HERE’S WHAT ELSE IS HAPPENING:

PARIS — France’s health agency announced Thursday evening that the country has had 52 new reported deaths and has over 16,000 new reported cases of coronavirus in 24 hours.

The number of new infections — 16,096, up from 13,072 the day before — is among highest recorded figures in France of coronavirus transmissions since widespread and large-scale COVID-19 tests in France began this summer, according to Public Health France.

Around 10 millions tests have so far been carried out.

SIOUX FALLS, S.D. — South Dakota reported a record number of new COVID-19 cases and hospitalizations for the second consecutive day as the state continued to see some of the nation’s fastest spread of COVID-19.

The Department of Health reported 463 new cases and 194 people hospitalized with COVID-19. Health officials also reported eight deaths, one of the largest single-day death tallies during the pandemic.

The new records in coronavirus numbers come two days after Gov. Kristi Noem on Twitter described the spread of COVID-19 as having “peaked” in the state. Her administration plans to continue to rely on people making personal decisions to stop the spread.

Over the last two weeks, the state has reported the nation’s second-highest number of new cases per capita. The rolling average number of daily new cases has increased by about 49% in that time.

But the surge in cases has not stopped Noem from pitching the state as a tourism destination. In a video posted on Twitter this week, she shoots at what appears to be a pheasant and says, “Less COVID, more hunting. That’s the plan for the future.”

BILLINGS, Mont. — Newly confirmed coronavirus cases in Montana have spiked to another record and health officials report that the number of infections tied to schools more than doubled in just a week.

State officials reported 333 new confirmed cases of the respiratory virus on Thursday, topping the previous single-day record set less than a week ago.

The number of schools with associated cases rose from 58 last week to 121. The overwhelming majority of those campuses reported new cases in the past two weeks.

Almost 500 infections in total have been tied to schools since classes widely resumed in late August. That includes about 200 cases at universities and about 200 in K-12 schools.

COVID-19 has killed 165 people and infected more than 11,000 people so far in Montana. The number of infections is thought to be far higher because studies suggest people can be infected with the virus without feeling sick.

LONDON — Britain has reported the highest number of coronavirus cases in a single day with 6,632 infections.

She says citizens must follow the new restrictions announced by the government this week to control the spread of the virus. Doyle suggested downloading the National Health Service’s new coronarvirus contact tracing app.

Britain has the highest death toll in Europe, with nearly 42,000 confirmed dead. The rise in cases announced Thursday reflects both the spread of the virus and increased testing, which has more than doubled since the peak of the first wave in April and May.

PHOENIX — Arizona hospitals are getting a break from the influx of coronavirus cases that nearly overwhelmed their ability to care for patients early in the summer.

However, new case counts are edging up. The state Department of Health Services reported 566 new confirmed cases across the state, bringing the confirmed total to 215,852.

The seven-day rolling average of daily new cases in Arizona has risen over the past two weeks, likely because the state is now counting some “probable” cases.

The state reported 565 people hospitalized on Wednesday, down from the mid-July high of more than 3,500.

MADRID — Health authorities are asking residents in Madrid to brace for tough weeks as the Spain’s cumulative caseload surpassed 700,000.

The extended region around Madrid, comprising a population of 6.6 million, is struggling to control outbreaks that have hit harder working-class areas with high-density.

More than 850,000 residents have been confined this week to their neighborhoods unless they have vital business.

Hundreds of protests gathered Thursday evening at the gates of several health centers in those areas to demand more resources for primary care medical personnel, who are grappling to test and follow up those suspected of having the virus.

ROME — Residents of Naples and the surrounding Campania region must wear masks outdoors amid an increase in coronavirus.

The ordinances come as Italy is trying to tamp down the same wave of new infections that are spiking elsewhere in western Europe.

ATHENS, Greece — State hospital workers in Greece staged a protest Thursday outside the country’s Health Ministry to demand increased hiring and staff support amid a surge in coronavirus infections.

A union representing the workers is calling on the government to hire hundreds of additional medical staff to the state-run health system and provide more administrative staff and translators to communicate with migrants.

Greece kept infection rates low before the summer but cases have risen in recent weeks. The total confirmed infections reached more than 16,000 since the start of the pandemic and the death toll to 357.

Public hospital managers say COVID-19 wards in greater Athens are near capacity and have staffing shortages.

The government says it is increasing intensive care spaces and vowed to step up policing health restrictions to ensure compliance by businesses and the public.

ST. CHARLES, Mo. — Bars and nightclubs are limiting capacity and closing early in the St. Louis area due to the coronavirus pandemic, resulting in larger crowds in St. Charles.

So the city is taking a cue from the 1984 movie “Footloose” and will ban dancing after 11 p.m. on Friday. St. Charles leaders met Wednesday with restaurant, bar and club operators and announced a temporary ban on “music activities.”

Mayor Dan Borgmeyer told KTVI-TV it feels “a little bit like the movie ‘Footloose.’” The movie starred Kevin Bacon as a big-city teenager who moved to a small town that banned dancing, at least until he turned things around.

COPENHAGEN, Denmark — The Danish government added Great Britain, Ireland, Slovenia and Iceland to its list of European nations where non-essential travels are not recommended as the Scandinavian country say numbers in these countries have increased.

Denmark made the move because of a flare-up of coronavirus cases and said that the countries have crossed the threshold of 30 cases per 100,000 inhabitants per week.

Danes advise against non-essential travels to 19 other surrounding countries.

“What we do right now, we will enjoy later. What we do wrong, we will suffer later,” Lofven said.

Lofven urged people to avoid gatherings, private parties, crowded places and recommended employers to allow people work from home. Schools and restaurants in Sweden have remained open, while wearing a face mask is optional and keeping social distance is recommended.

Sweden will lift a national ban on visiting elderly care home next month. The country has 90,289 confirmed cases and 5,878 deaths.

HELSINKI — Finland says it will reintroduce entry restrictions Monday on traffic between neighbors Iceland, Norway and Sweden as well as Estonia, Germany and Slovakia because of rising coronavirus infections in these countries.

The Finnish government says only countries with a maximum of 25 coronavirus cases per 100,000 inhabitants in past two weeks are allowed to travel to the Nordic country.

Traffic in border areas between Finland, Norway and Sweden will be allowed for those residing in nearby communities, with certain restrictions. Relaxed rules also apply to business-related travel.

LISBON, Portugal — Portugal’s government is extending through mid-October its curbs on the sale and consumption of alcohol and limits on gatherings.

The official number of coronavirus cases in Portugal has been rising for five weeks. On Thursday, authorities reported 691 new cases over the previous 24 hours. Officials say they expect the number of new daily cases to reach1,000 next week.

The restrictions include a 10-person limit on gatherings and only four people allowed in food establishments close to schools. Authorities have also banned alcohol sales after 8 p.m., except for in restaurants, and drinking in public spaces.

In Moscow, more than 1,000 new cases were recorded Thursday for the first time since June.

The number of daily new cases started to grow in late August in Russia, which has the fourth largest caseload in the world at 1.12 million infections. There have been nearly 20,000 confirmed deaths.

Officials have repeatedly dismissed speculation of a second lockdown, saying the increase was expected and Russia’s health care infrastructure was prepared for it.

Russia was the first country in the world to approve a vaccine against the virus last month. The move elicited criticism from experts worldwide because the shots were tested on a few dozen people. More studies are needed to establish the vaccine’s safety and effectiveness.

JOHANNESBURG — Health experts are criticizing the early modeling in the coronavirus pandemic that assumed people in Africa would die in droves.

Uganda hospital official Sam Agatre Okuonzi told a World Health Organization briefing it was predicted by September there would be 600,000 cases of COVID-19 and 30,000 deaths.

Okuonzi says the models were informed by “well-entrenched biases about Africa.”

WHO Africa chief Matshidiso Moeti says Africa’s youthful population has made a difference, with just 3% of the population over age 65. She says several countries imposed early lockdowns and there’s less travel from other regions.

Some health experts are looking into whether exposure to previous coronaviruses has helped immune systems to better respond to this one. They’ve also said the continent’s experiences with previous outbreaks is likely helpful among the 54 countries and 1.3 billion people.

Who Invited the Far-Right Oath Keepers to Downtown Louisville?

Fri Sep 25 , 2020
Gerry Seavo James LOUISVILLE—On Wednesday night, at least 20 members of the Oath Keepers, a far-right militia group, were observed guarding storefronts in downtown Louisville amid sometimes violent unrest over the lack of charges in the police killing of Breonna Taylor. The businesses included Bader’s Food Mart—which is also a […] 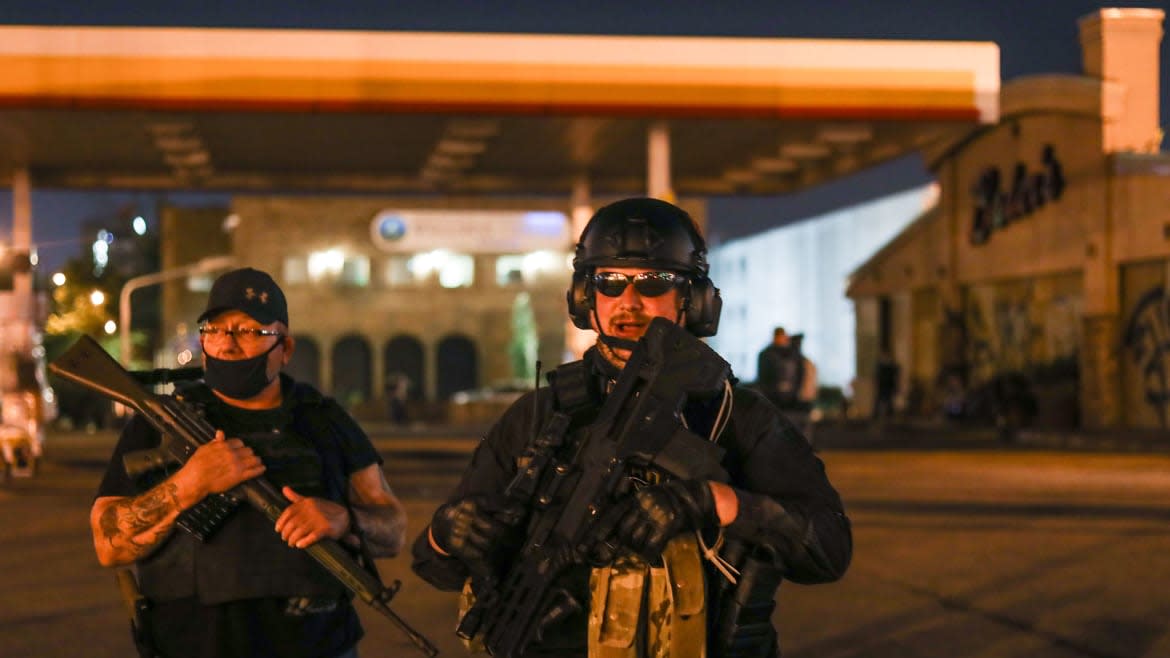