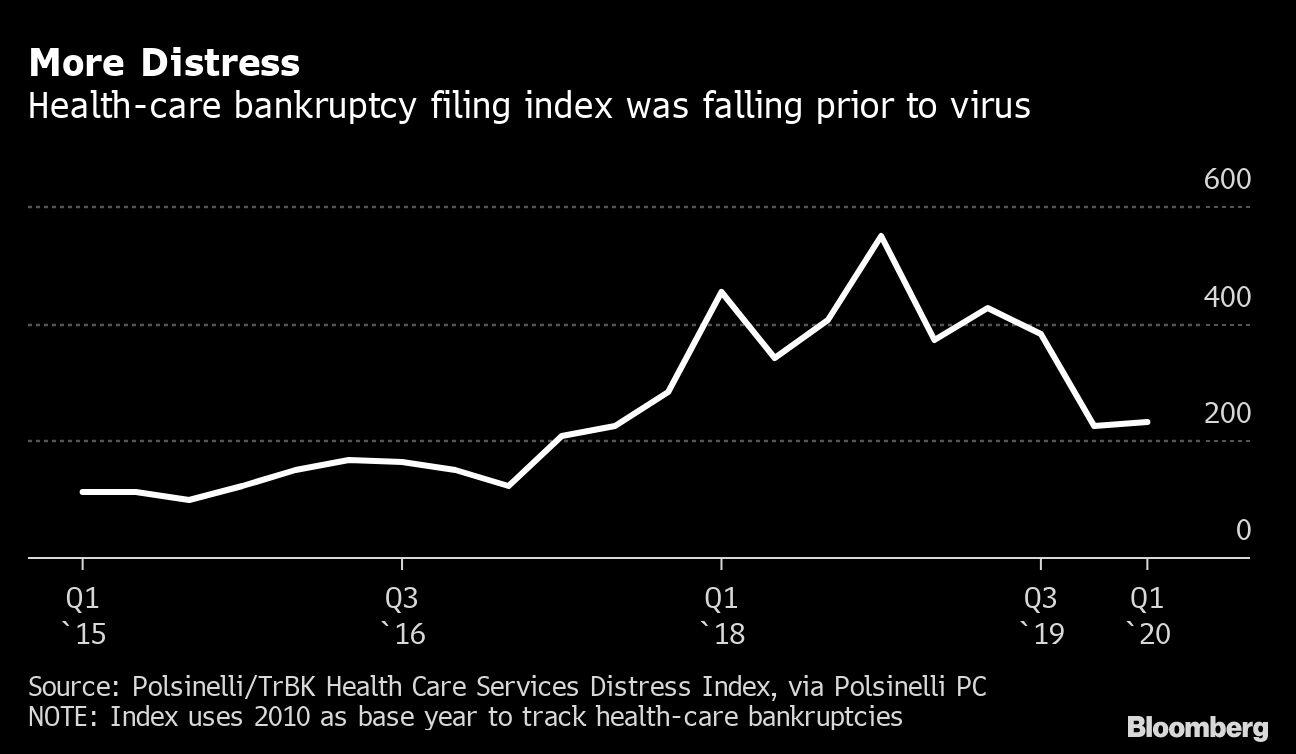 (Bloomberg) — The century-old Henry County Health Center in southeast Iowa was already losing money before the pandemic hit. With a shrinking number of births and trouble recruiting staff, it had planned to close its obstetrics department.

Then came the shutdown, which reduced the hospital’s revenue by half as profitable elective surgeries came to a halt. Even with some procedures set to start up again, Chief Financial Officer David Muhs sees no easy recovery.

“You just can’t turn the faucet back on,” he said.

It’s one of the cruelest realities of the coronavirus pandemic. America’s already-ailing hospitals are being pushed even further into financial ruin, threatening to force a growing number of them to file for bankruptcy or even close. The onslaught could result in some $202.6 billion in losses for hospitals across the country by the end of June, according to the American Hospital Association.

While even stronger facilities see revenue evaporate, the demands of the illness may hasten the demise of weak systems, and federal aid likely won’t be enough as millions lose the private insurance critical for hospitals to pay their bills.

“I just don’t know how many places survive this,” Rod Hochman, chief executive officer of Providence St. Joseph Health and chair-elect of the AHA, said in an April interview. “It’s going to be brutal.”

His chain, based in the Seattle area, with 51 hospitals and more than 1,000 clinics across seven western states, has seen its costs rise and revenue drop by 80% as of April, though it’s not at risk of closing.

Some pandemic hotspots, including New York, Detroit, Chicago and Seattle, have large hospital systems that can likely withstand the stress. “These are not places that are just holding onto their ratings or managing cash day to day,” Fitch Senior Director Kevin Holloran said, noting strong balance sheets.

Investors aren’t immune to the threats hospitals face. Quorum Health Corp., a publicly traded chain of more than 20 hospitals, filed for bankruptcy in April as the virus strained its already-tenuous finances. At the other end of the spectrum, HCA Healthcare Inc., considered one of the most successful operators, suspended quarterly dividends and share repurchases.

“We will get back to normal in time,” Chief Executive Officer Sam Hazen said in an earnings call, “but we realize it may be a new normal.”

Returns on junk-rated hospital bonds have fallen more than 11% this year, a steeper loss than the broader high-yield segment of the municipal-bond market, according to Bloomberg Barclays indexes. As the pandemic set in, Wall Street banks saw a rush of hospitals draw down existing credit credit lines and were inundated with requests for new or expanded financing.

Questions also have been raised about private equity ownership in the health-care sector leaving some facilities hamstrung with debt. The pause in revenue from elective procedures will only drive leverage higher at debt-laden groups, Holloran said.

Problems will persist even when the crisis is over, especially in the rural facilities already grappling with acute financial distress. As many as half of U.S. hospitals could be in trouble, double the number pre-crisis, according to Boston Consulting Group.

“The pandemic will create an accelerated tipping point, and hospitals will be forced to drastically restructure or close more quickly,” said James Wesp, principal of health-care consultancy Oasis LLC. More closings will bring more illness and death, he said, “due to lack of timely access.”

There will be increased pressure for consolidation, but buyers won’t want the bottom tier of facilities, said Sanjay Saxena of Boston Consulting. That once meant about 20% of the total, said Saxena, co-leader of the firm’s Center for U.S. Health Care Reform and Evolution. “Now we have potentially almost 40 or 50% of the hospital system in the U.S. that’s in a really tough spot,” with less than a year of cash on hand.

A wave of bankruptcy filings from hospitals is likely on its way, according to restructuring lawyer Jeremy Johnson of law firm Polsinelli. His firm has received dozens of calls from distressed health-care providers since the virus hit, he said, adding that cash-on-hand and access to credit determines the breadth of options available to them.

“Conservation of cash is king,” he said. “Bankruptcy really isn’t an option for most folks at the moment because things are so volatile. You don’t want to file unless you have an exit strategy.”

Relief from Washington is a crucial variable. The federal government allocated $175 billion in grants to health-care providers to make up for lost revenue — roughly equivalent to what the U.S. typically spends in three and a half weeks on care at hospitals, clinics, nursing homes, and other medical services, according to an analysis of federal spending data by Bloomberg News.

Hospital administrators are likely waiting to see how much more government aid will ultimately be doled out and when they’ll be allowed to resume money-making elective surgeries before deciding whether to file for bankruptcy, said Sam Maizel, a partner at Dentons, who specializes in health-care restructuring.

“Some have the financial wherewithal to sustain themselves, but a lot of systems don’t,” he said.

Initial distributions help plug some of the gap in lost revenue, but not all of it, said Anne O’Hagen Karl, a partner at Manatt Health, a professional services firm. The first round of money out the door was $30 billion, which “doesn’t get anywhere near to getting them back to baseline,” she said. “The magnitude of the losses are just staggering and beyond what most had expected.” Beyond billions in grants that don’t have to be repaid, the federal government has allowed medical providers to borrow against their expected future Medicare billings.

Some states are starting to allow non-emergency procedures as they begin the process of loosening stay-at-home orders. But even as restrictions lift, it’s unclear how many Americans will venture back by choice.

Hospitals “don’t have the cushion” even after things reopen, Saxena said. “I don’t think people are going to rush back.” Declines in markets have also damaged hospitals’ investment portfolios just as revenue dried up, Saxena said.

Prospects for at least some of the U.S. hospital industry looked brighter going into 2020. Fitch raised its outlook for the nonprofit hospital sector in December to stable from negative, saying the industry seemed to be getting costs in line with long-pressured revenues. “It lasted for 47 glorious days,” Holloran said.

At Henry County Health Center, Muhs said limited elective procedures like outpatient surgeries and mammograms were set to resume this week. The group also received $4.6 million in federal-relief grants and other aid targeted to rural hospitals– or 13% of annual revenue, which helps alleviate the stress. Ahead of the government support, Muhs said Henry County was already in better shape than many of its peers.

“Rural health care’s already struggling,” he said. “This Covid has just put another burden on us.”