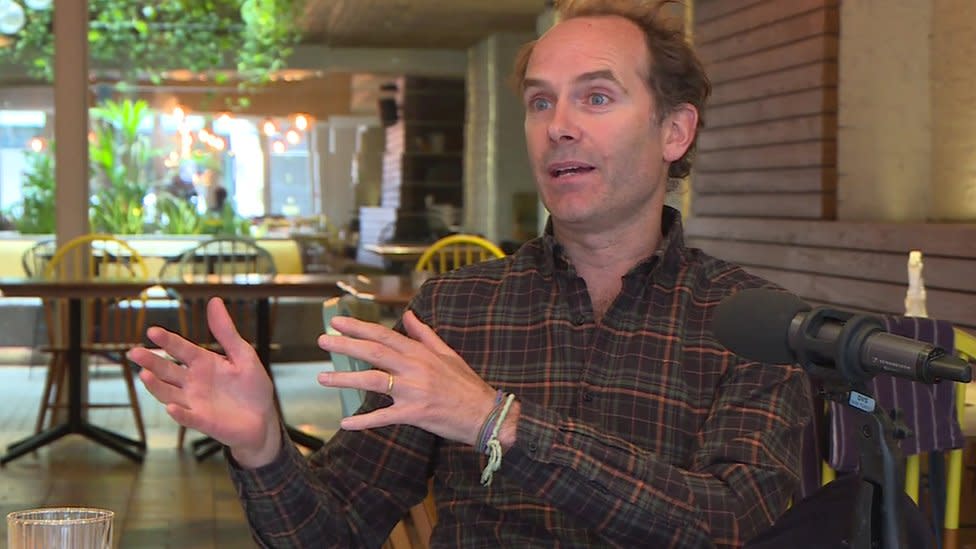 “A lot of people are going be nervous about coming out. We’ve all got to do our jobs in making people feel confident, making them feel safe, but also giving them that experience that hospitality is.”

Restaurants and pubs across the UK have been hard-hit by lockdown measures that were introduced in March in a bid to stop the spread of the coronavirus.

In England, the hospitality industry expects to be allowed to reopen from 4 July, although there’s no firm date yet for Scotland, Wales or Northern Ireland.

“The reality is that people are not going to come back in their droves, they’re going to slowly build back that confidence,” he says.

Wahaca typically serves about 60,000 diners each week. But the restaurant chain expects that once it has reopened, sales will initially be down by about 60%, before slowly coming back up over the course of the next year.

Like other British restaurant chains and retailers, Wahaca is considering a number of measures in a bid to keep staff and workers safe amid the pandemic.

Mark says customers could be given the option of ordering food on apps. Other safety measures are likely to include having staff wash their hands every 20 minutes – once its 28 UK outlets have reopened.

And although Wahaca is keen to make things work in a newly socially-distanced world, Mr Selby expects the restaurant chain to struggle, if social distancing guidelines are not relaxed at least somewhat.

“I don’t see how anyone makes money on two-metre guidance, it becomes an impossible situation to work to,” he says.

Other countries use lower numbers for social distancing recommendations. In France, for example, the recommended distance between customer and staff is one metre.

The Department of Business, Energy and Industrial Strategy (BEIS) said it was working with industry “at pace to develop safe ways for pubs, restaurants, bars and cafes to reopen at the earliest opportunity it is safe to do so”.

The government is expected to release guidelines on operating in a “safe” manner as soon as this week, so firms have time to prepare before reopening in England.

Trade association UK Hospitality is asking the government to provide further support for businesses if the two-metre rule remains in place in the UK.

Its chief executive Kate Nicholls said: “If we’re operating at such a loss and furlough is going to be withdrawn, then it’s vital that these businesses which have been cash-starved since March have additional funding to help with rents in particular, which is the second biggest overhead they’re facing.”

The majority of Wahaca’s 1,000 employees have been furloughed under the government’s job retention scheme.

Mr Selby credits the scheme with making things much easier for the restaurant chain: “Before the furlough scheme, we said that we were going to have some very difficult decisions to make.”

But he called for the government to go further: “Businesses like ours in the restaurant space are absolutely going to need more support.

“I can guarantee for the next six to eight months, with sales where we expect them to be, we are going to need serious rent concessions.”

Section 82 of the government’s Coronavirus Act 2020 came into force on 25 March to help protect commercial tenants.

It banned the forfeiture of commercial leases until 30 June 2020 – or longer if the government deems necessary – for non-payment of rent.

But the Act has not prevented landlords from taking other legal actions against tenants in order to force them to pay rent withheld due to the lockdown.

In May, the government said it would soon publish a code of conduct for both commercial landlords and tenants who are facing additional pressures on their finances.

Many casual dining chains have already been struggling in the face of rising overheads and falling consumer spending.

Those in the hospitality sector have seen their troubles worsen due to the coronavirus pandemic, as customers have been forced to stay at home amid lockdown.

Carluccio’s, for example, was bought out of administration by the owner of Giraffe restaurants. Despite its rescue, more than 1,000 jobs will be lost at the Italian restaurant chain – over half of its total workforce.

And last week The Restaurant Group, which owns Frankie & Benny’s, announced that as many as 120 outlets will not reopen after lockdown.

In an email to managers seen by the BBC, the company said: “Many sites are no longer viable to trade and will remain closed permanently.

“The coronavirus crisis has significantly impacted our ability to trade profitably, so we’ve taken the tough decision to close these restaurants now.”