Where does one begin when talking about Grammy Award-winning and chart-topping icon Mariah Carey?

To the casual pop culture consumer, Carey exists in “I don’t know her” and “Loving that concept” GIFs, and at Christmastime when holiday jingle “All I Want for Christmas Is You” blasts through department store loudspeakers. But Carey fans – also known as her “lambs” – really know her, and leap to her defense any chance they get.

Any reader of her new memoir, “The Meaning of Mariah Carey” (Henry Holt and Company, 349 pp.), however, will appreciate and devour unapologetic chapters that aim to take back the narrative on Carey’s terms, dahling (and gays, yes, she uses the term “guncles” in this book). She writes stories about everything: her childhood; her time in the music business and work with greats Whitney Houston and Aretha Franklin, to name a few; tabloid gossip; her work in the Oscar-winning film “Precious”; and her marriages and children. Carey weaves chapters with her lyrics that speak to what was happening in her life at that time.

Speaking of, her next album, “The Rarities,” arrives Oct. 2. But let’s take a look at how she got here.

‘I don’t acknowledge time’: Mariah Carey on ‘All I Want For Christmas Is You’ turning 25

Carey’s marriage to Tommy Mottola was ‘not normal’

Carey breaks down her prison of a marriage to former Sony executive Tommy Mottola in excruciating detail. The uneven power dynamics in the relationship (Carey was an artist at the label) ring unbearably alarming in the #MeToo era. Her friends told her she didn’t have to marry him, she says, but she believed there was no way out of the controlling relationship.

The pair eventually went to therapy, where Carey described his manipulative behavior. “Why can’t he just let me go to the spa or to the movies, or do anything? I did nothing wrong!” Her therapist said, “Sweetie, it’s not normal. Why are you acting as if you’re dealing with a normal situation? It’s not normal!” according to Carey. In another disturbing incident, Carey writes that Mottola placed the flat side of a butter knife against her right cheek.

“I met Mariah over 32 years ago and together achieved a staggering 15 #1 hits in a row and sold over 200 million albums worldwide…breaking all records globally. I am deeply gratified for the role I played in Mariah’s well-deserved and remarkable success and continue to wish her and her family only the very best,” Mottola told USA TODAY through his representative, Cindi Berger, when asked for comment.

Another therapist later named the physical illness she was feeling following difficult moments in her life: “somatization,” defined as the physical manifestation of emotions. “Having a highly respected professional name, it validated that what I was physically experiencing was real,” Carey writes.

“Normal” for Carey would later come in the form of baseball player Derek Jeter, with whom she had a romantic comedy-style kiss on the rooftop of his building. Her song “The Roof”? Yes, it’s about this. Another of her relationships also felt like it was out of a movie: Luis Miguel, the so-called “Latin Elvis,” filled a private jet with red roses to surprise her. “Same,” we thought.

Carey also briefly discusses her relationship with ex-husband Nick Cannon and a miscarriage she experienced, as well as the birth of their twins Monroe and Moroccan. Calling her life a journey is an understatement.

Look at these looks: Mariah Carey: 30 years in the spotlight

Carey’s destructive childhood: ‘Not uncommon for holes to be punched in walls’

Carey grew up with a Black father, white mother and two siblings, Morgan and Alison. Morgan proved a destructive force both in her childhood and adulthood. “When my brother was around, it was not uncommon for holes to be punched in walls or for other objects to go flying,” Carey writes. Her emotionally distant mother proved unable to care for her the way she needed; her sister Alison once threw boiling hot tea on Carey.

Another alarming incident: Her sister’s boyfriend, John, forced her to kiss him. “I was nauseous and scared; I felt immobilized,” Carey writes.

As an adult, her family continued to torment her. Her own mother even called the police on her during an argument. “Even Mariah Carey couldn’t compete with a nameless white woman in distress,” Carey writes, noting this incident was way before the #BlackLivesMatter movement and cell-phone activism — not, she observes, that this has stopped police violence against Black people.

Carey struggled with her mixed-race identity growing up

People were surprised to learn that her father was Black and mother was white – to her detriment. Teachers accused her of using the wrong crayon for her father when assigned to draw a portrait of her family in preschool.

Carey later played Hodel, one of main character Tevye’s daughters, in a production of “Fiddler on the Roof,” and after receiving “loud clapping” for her performance, her father handed her flowers at the edge of the stage. Everyone stared when they realized he was her father. “I got my thunderous applause and I got my flowers, but I never got another major role in a play at that camp again,” Carey writes.

A group of girls once bullied her and called her the N-word, chanting it repeatedly. Lyrics to her song “Looking In” followed this passage, which spoke to this and other difficult moments: “She smiles through a thousand tears / And harbors adolescent fears.”

Carey on her PTSD

Carey details her obsession with Marilyn Monroe throughout the book, including her rescue of Monroe’s mother’s piano. “Marilyn Monroe’s white baby grand piano is the centerpiece, the piéce de résistance, of my own glamorous Manhattan penthouse,” Carey wrote. We couldn’t help hum “Secondhand White Baby Grand” from the former NBC series “Smash” when reading about this (sorry, Mariah).

But Carey’s fans (her “lambs”) drive everything she does. She shouts out several times they proved their power on the charts, getting “Glitter” to go number one in 2018. Not to mention “All I Want for Christmas Is You” charting in four decades.

“I always go to my main source for strength – faith in God, but also love from my fans and all the people who didn’t give up on their faith in me,” Carey writes. “This is not to say I don’t struggle with PTSD from the collective events in my childhood, my marriage, and the dark ‘Glitter’ years. I work on my emotional recovery daily.”

On her new album: Mariah Carey announces new album ‘The Rarities’: ‘This one is for you, my fans’

France and the UK recorded their highest daily COVID-19 cases ever, and the EU warned that some countries have worse outbreaks than in March

Fri Sep 25 , 2020
A waiter looks out on the terrace of a Paris bar during the coronavirus pandemic on September 24, 2020. Kiran Ridley/Getty Images France and the UK this on Thursday set all-time records for daily coronavirus infections. Other European countries are seeing their highest cases since the continent’s peak earlier this […] 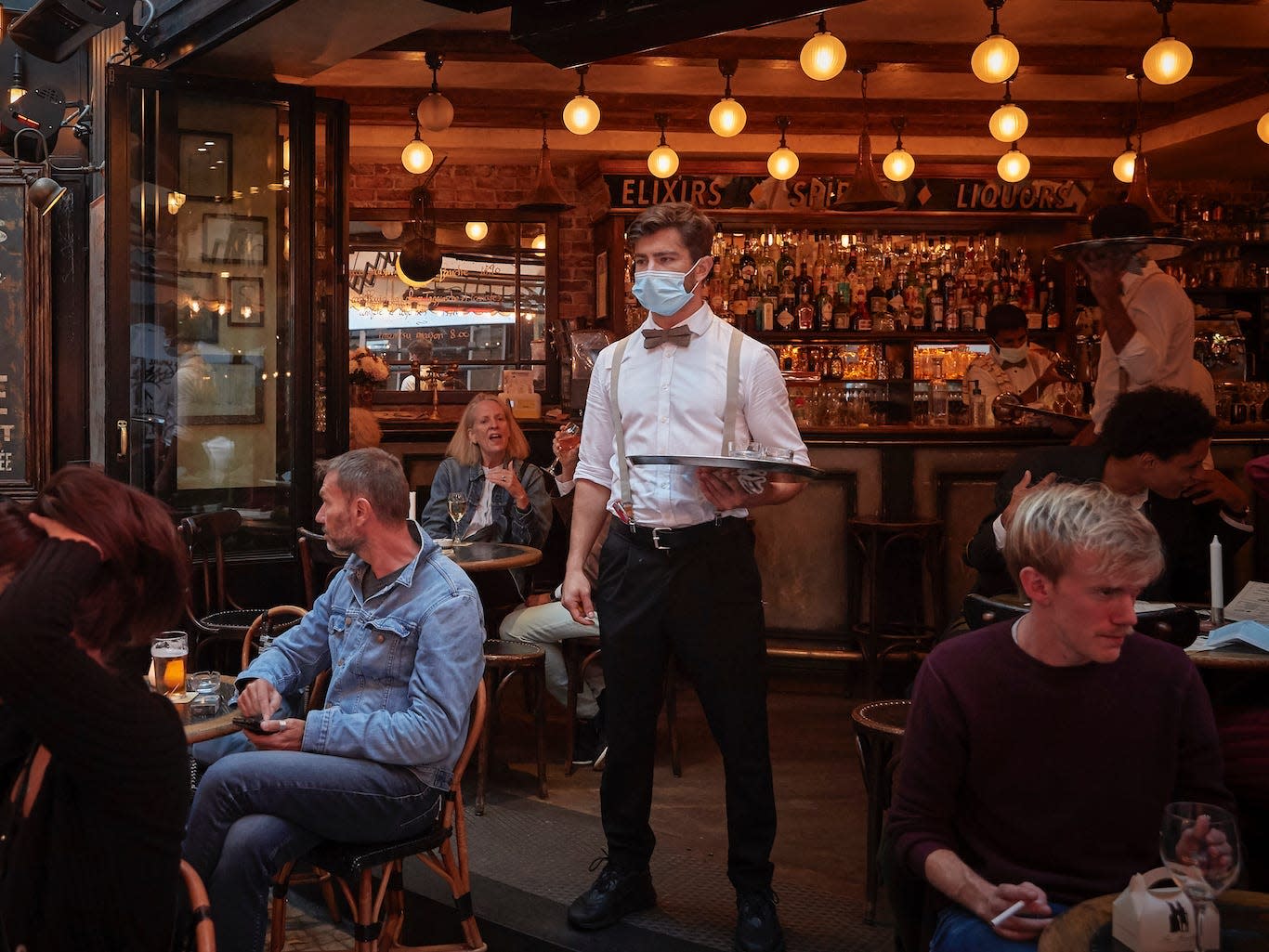