(Bloomberg) — U.S. virus cases rose 0.6%, matching the average daily increase over the previous week. France reported the most daily cases since its nationwide lockdown. Global Covid-19 infections are closing in on 30 million.

Moderna, as well as Pfizer and its partner BioNTech SE, took the unusual step of releasing their plans for analyzing vaccine-trial data to counter concern that the race for a safe and effective product is being politicized.

Global Tracker: Cases pass 29.9 million; deaths exceed 941,000Tracking the spread of the coronavirus outbreak in the U.S.Trump’s vaccine ambitions contradict his own health experts Londoners slowly return to work after schools reopenedTexas relaxes some virus restrictions across most of the stateU.K.’s demand for coronavirus tests far outstrips capacity

AstraZeneca Plc, the drugmaker working with the University of Oxford on a Covid-19 vaccine, contradicted a report that a volunteer in U.K. trials developed a rare nerve disease that might signal severe safety problems.

AstraZeneca was responding Thursday to a CNN report citing documents indicating that the diagnosis of the participant was confirmed as transverse myelitis. The diagnosis was “based on preliminary findings,” and is inaccurate, the Cambridge, England-based drugmaker said in an emailed statement.

Coronavirus cases in the U.S. increased 0.6% as compared with the same time Wednesday to 6.65 million, according to data collected by Johns Hopkins University and Bloomberg News. The increase matched the average daily gain of over the past week. Deaths reached 197,244.

Makers of two of the leading coronavirus candidates disclosed detailed information about their pivotal late-stage clinical trials and how they plan to gauge their shots’ safety and effectiveness.

The moves by Moderna Inc., followed within hours by Pfizer Inc. and partner BioNTech SE, follow concern that the effort to develop a Covid-19 is becoming politicized and that an inoculation could be rushed to market before it’s proven safe and effective.

The University of Tennessee canceled next year’s spring break, Knoxville-based broadcaster WVLT reported. School officials said the change will reduce the potential for travel-related spread of Covid-19 and allow the university to maintain the required number of teaching days, according to the report.

Governor Gavin Newsom said Wednesday that California has turned the corner in suppressing the virus after a summer surge. Deaths increase by 106, bringing the total to 14,721.

The governor signed a new law Thursday that says essential workers in the state who contract Covid-19 and file a worker’s compensation claim will continue to be afforded a presumption that the infection happened on the job.

Meadows said the industry needs $25 billion, and that as many as 50,000 jobs are at risk. Airlines have warned that they plan mass reductions after an existing federal prohibition on job cuts expires at the close of business on Sept. 30.

The number of people calling the Covid-19 phone helpline and visiting the government website totaled three to four times the number of tests, Dido Harding, head of the National Health Service Test and Trace program, told the House of Commons Science and Technology Committee on Thursday.

Harding was giving evidence as the government’s testing program comes under increasing pressure to deal with a surge in demand following the return of children to school and as people head back to work. To compound matters, cases are rising exponentially again after falling off over the summer.

France reported the most new daily coronavirus cases since the end of the country’s lockdown in May.

Cases rose by 10,593 on Thursday, according to data from the public health agency, the second time in six days that new infections topped 10,000. The seven-day rolling average rose to 8,791, climbing for a month to the highest since the start of the outbreak. Deaths linked to the virus increased by 50 to 31,095.

“The virus did not become less dangerous with the summer, alas,” the minister said at a press conference on Thursday. “We are now seeing the number of Covid patients in intensive care go up in a worrying way.”

Hans Kluge, the World Health Organization’s regional director for Europe, said the region is showing “alarming rates of transmission.” The September case numbers “should serve as a wake-up call for all of us,” he added.

Restaurants, retail stores, office buildings, factories, gyms and museums will be allowed to operate at 75% of capacity starting Sept. 21, Abbott said during a media briefing on Thursday. That’s up from the 50% limit in place since late June, when a resurgence in Covid-19 cases prompted him to reverse an earlier opening order.

The easing of restrictions applies to 19 of the Lone Star state’s 22 hospital regions. Abbott said patient tallies were still too high in three regions — the Rio Grande Valley, Laredo and Victoria — to relax the limits just yet.

Ireland reported 240 more coronavirus cases and one death, ahead of an expected increase of restrictions in Dublin. The Irish capital accounted for about half the newly diagnosed cases. The government is expected to sign off Friday on moving Dublin to the next level of restrictions, including keeping pubs that don’t serve food closed and tightening limits on travel outside the city.

Spain reported 4,541 daily new cases, fewer than the 4,728 reported a day earlier. Deaths declined for the fourth consecutive day to 19, according to Health Ministry data. That compares to more than 800 on several days in March, when the pandemic first raged in Europe.

Mexico will extend land travel restriction at its border with the U.S. through Oct. 21, the Foreign Affairs ministry said in tweet. The extension came after a review of the spread of Covid-19.

The swearing-in ceremony of Brazil’s chief justice last week is emerging as a potential new cluster of coronavirus infections among the country’s political elite.

Lower house Speaker Rodrigo Maia was diagnosed Wednesday, becoming the fifth senior government official to test positive for Covid-19 after attending the event. Maia is currently experiencing mild symptoms and is being treated at his official residence in Brasilia, where he will remain in isolation respecting medical recommendations, his press office said in a statement.

U.K.’s government will no longer be asking people arriving from Singapore and Thailand to quarantine as they enter the country, Transport Secretary Grant Shapps said in a tweet. However, those arriving from Slovenia and Guadeloupe will be asked to self-isolate as it removes the two countries from the Travel Corridor list.

Florida reported 674,456 cases on Thursday, a 0.5% rise from a day earlier that compares with an average 0.4% increase in the previous seven days. That’s a daily change of 3,255 cases, according to the health department report, which includes data through Wednesday.

On a seven-day rolling basis, new cases totaled 19,725, the highest in a similar period since the Sept. 7 report, marking an upward trend from recent lows. Still, weekly case counts are about a quarter of peak levels during July.

Deaths among Florida residents reached 13,086, an increase of 1.1%, or 147. Deaths often trail infections by weeks and generally take even longer to be reflected in the data.

Portugal reported the most new cases since April, an increase of 770 that brought the total to 66,396. The number of Covid-19 patients in the hospital and ICU care fell.

Portugal reported more than 600 confirmed cases on six of the last nine days. Authorities on Tuesday set a nationwide cap of 10 people for most public gatherings, expanding a rule in place in Lisbon. The previous limit outside the capital was 20.

New York Mayor Bill de Blasio announced a revised schedule for in-person schools that will delay kindergarten through eighth grade openings to Sept. 29 and middle and high schools until Oct. 1.

Learning will begin remotely Sept. 21 for all but pre-kindergarten pupils and those with severe developmental disabilities.

The number of Americans applying for jobless benefits resumed its decline, signaling a gradual improvement in the battered labor market.

Jobless claims in regular state programs decreased by 33,000 to 860,000 in the week ended Sept. 12, which coincides with the reference period for the government’s monthly jobs report, according to Labor Department figures released Thursday. Continuing claims, the total number of Americans on state benefit rolls, fell by almost 1 million, to 12.6 million, in the week ended Sept. 5.

Economists expected initial claims of 850,000 and continuing claims of 13 million, according to median estimates in a Bloomberg survey.

Austria is banning indoor meetings of more than 10 people from Monday after bars, clubs and private parties fueled new infections. “We are noticing that we have an exponential increase of infections,” Chancellor Sebastian Kurz told journalists in Vienna. “We have to react now to avoid a second lockdown.”

Mask requirements are also widened to include markets and religious services and face coverings will have to be worn in restaurants while not seated, Kurz said. The 7-day average of daily new infections has risen for 12 straight days and more than doubled in that period to 658 as of Thursday. The number of active virus cases passed 7,000, a level last seen during the lockdown in April.

Thu Sep 17 , 2020
JOLIET, IL — A number of Joliet area restaurants are no longer interested in following the letter of the law when it comes to Gov. JB Pritzker’s coronavirus restrictions for Will County. Thayer Brothers Deli on Ruby Street has resumed serving indoor guests this week. On Thursday, when Joliet Patch […] 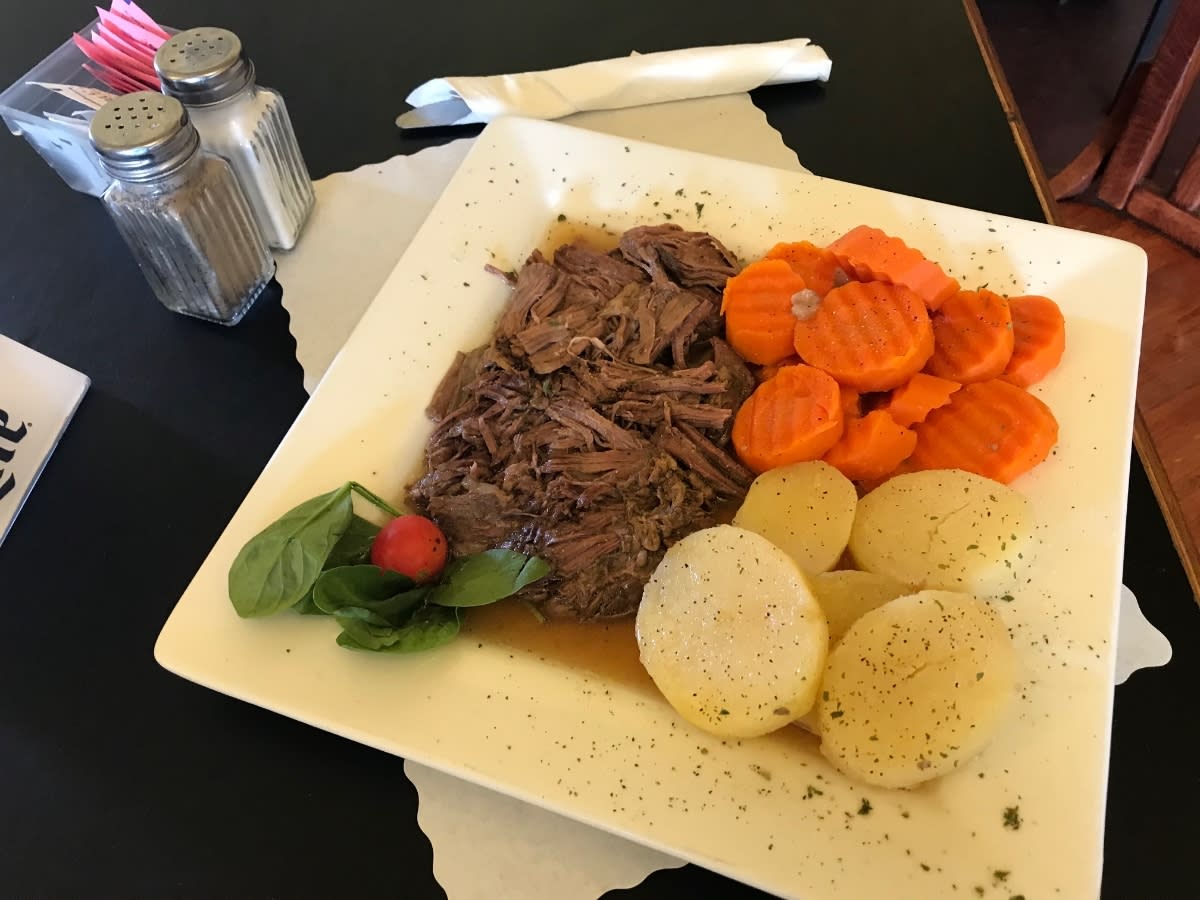