(Bloomberg Opinion) — You would expect the coronavirus outbreak to have focused the minds of Europe’s politicians and drugmakers on finding a vaccine. But it’s the continent’s fragile dependence on Asia for raw generic drug ingredients like paracetamol that’s proving a more immediate headache.European Union health ministers are due to discuss the security of medical supplies on Friday, after warnings that the bloc faces potentially significant shortages of crucial components imported from China as the country attempts to get back to work after virus-related shutdowns. France has openly called for more manufacturing “sovereignty” from foreign suppliers, as it scrambles to guarantee the supply of masks and control the price of hand-gel to try to reassure the public.It may seem pretty insensitive to point the finger at China and politicize medical-supply issues, given the country’s own tally of infections and deaths from the Covid-19 disease. Yet the scale of pharmaceutical dependence on Asia clearly deserves more attention than, say, textiles. The data is patchy but France’s National Pharmaceutical Academy estimates the EU imports 80% of its “active pharmaceutical ingredients,” mostly from China and India. The U.K. medicines regulator estimates Chinese manufacturers make around 40% of all APIs used worldwide.What makes Covid-19 so dangerous for imports is that it combines Chinese factory shutdowns with domestic political pressure to act aggressively. India, itself very reliant on China for pharmaceutical ingredients, spooked the world this week by announcing curbs on exports of common drugs including paracetamol. French laboratories have warned of possible medicine shortages later this year, according to Les Echos. Over in the U.S., which has similar supply issues when it comes to China, the Food and Drug Administration has said one drug is in short supply because of the coronavirus outbreak without naming it.Short-term ideas such as stockpiling or resource sharing will probably be examined today in Brussels. But supply risks have been known for a long time and will require deeper fixes, according to Philippe Luscan, an executive who oversees French drugmaker Sanofi’s industrial footprint. In an interview in his Paris office — where handshakes are now discouraged, obviously — he outlines Sanofi’s own push to get pharmaceutical production re-shored back in Europe.The company aims to spin off six European factories (in the U.K., France, Germany, Italy and Hungary) into a new listed entity by 2022, representing 1 billion euros ($1.1 billion) of revenue. That entity will strike deals with firms that want to expand EU production. The Covid-19 crisis serves as one “salutary” incentive to do so, says Luscan. There are others, he adds: Quality issues that have forced products off the shelves, rising labor costs in China, and a pollution crackdown that’s temporarily shuttered factories.This alone is probably unlikely to reverse the forces of globalization. If so many generic ingredients are manufactured in Asia, it’s because the plunging price of off-patent drugs using them and the rising cost of building lucrative new drug pipelines have pushed drugmakers to seek out cheap bases abroad. The head of Swiss company Novartis AG’s generics business, Richard Saynor, said last month that some antibiotics were being sold in Europe for “less than the price of chewing gum.” Even Sanofi’s own initiative looks like an elegant way to free up capital from a low-margin business.But Luscan’s initiative should also prod policy makers into doing their part to boost production. Viewing medicines as a strategic asset rather than a cheap commodity — one of the recommendations of Rosemary Gibson’s 2018 book “China Rx” — would be a good start, as would thinking up financial incentives to encourage local production. EU initiatives designed to boost new medical research are a good thing, but the security of generics shouldn’t be ignored.The big unknown is how bad the current crisis could get. Bloomberg Intelligence pharma analyst Sam Fazeli warns that if Chinese factory production bounces back while the virus spreads in the EU, it’s possible that European manufacturing will become a bigger source of disruption. Officials in Brussels should bear that in mind when mapping out emergency scenarios.

Still, it’s a good thing overall that the EU is finally waking up to drug supply risks. It shouldn’t miss the opportunity to do something about it  — or seed the makings of an even bigger headache when the next pandemic threat strikes.

To contact the author of this story: Lionel Laurent at [email protected]

To contact the editor responsible for this story: Melissa Pozsgay at [email protected]

Lionel Laurent is a Bloomberg Opinion columnist covering Brussels. He previously worked at Reuters and Forbes.

Tue Mar 31 , 2020
(Bloomberg) — Reversals in positioning that may show sellers are exhausted. Extreme readings in market breadth, pointing to washouts in investor sentiment. Rallies in stocks targeted by shorts. In trying to pick the bottom in equities, Wall Street has little choice but to rely on signals that worked in the […] 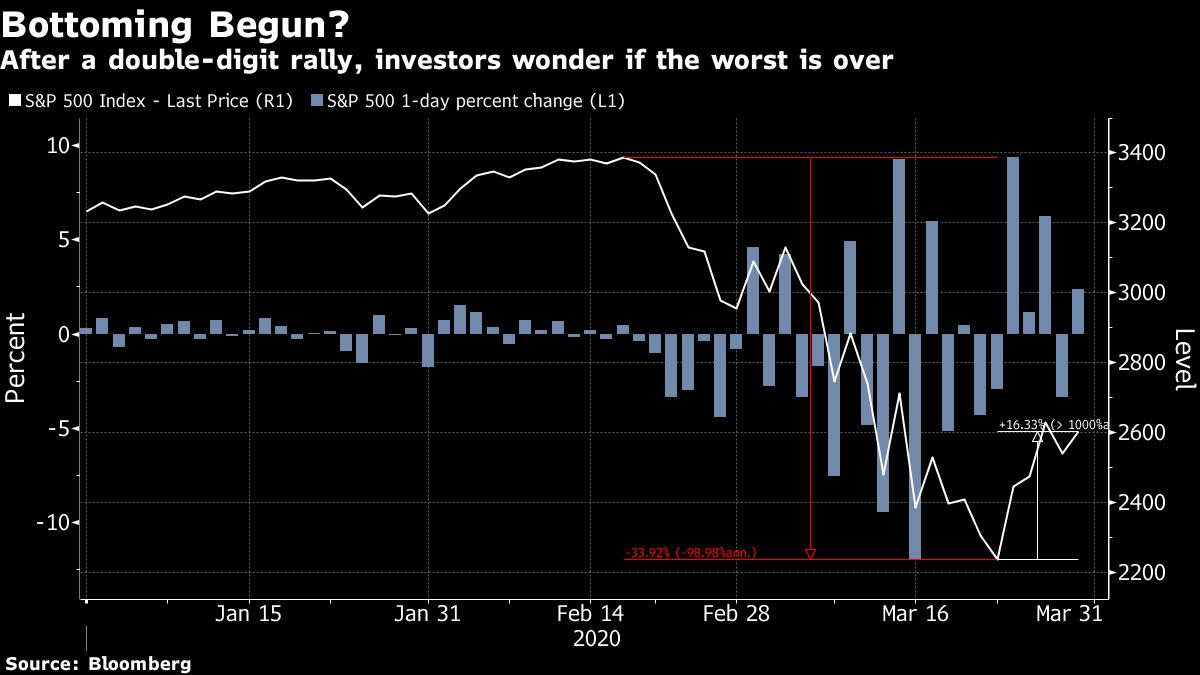